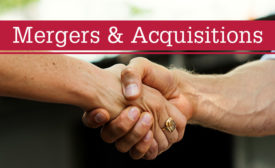 No Comments
GTT Communications, Inc. has announced the completion of its acquisition of Interoute, operator of one of Europe’s largest independent fiber networks.
Read More 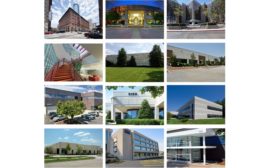 The transaction was valued at $750,000,000.
No Comments
Carter Validus Mission Critical REIT, Inc. (the "Company") has announced that it sold a 14-property data center portfolio (the "Portfolio") for $750,000,000, to an affiliate of Mapletree Investments Pte Ltd.
Read More 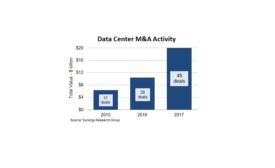 On average through 2017, there was almost one significant M&A deal closed every week.
No Comments
New data from Synergy Research Group shows that the total value of significant data center-oriented M&A deals that closed in 2017 reached $20 billion, far surpassing the total for 2015 and 2016 combined.
Read More

No Comments
Carter Validus Mission Critical REIT, Inc. has announced that it sold an approximately 250,000 sq ft data center located on approximately nineteen acres of land in the Chicago metropolitan area (the “Chicago Data Center”), for $315,000,000 to an affiliate of Digital Realty Trust, LP.
Read More

No Comments
Iron Mountain Incorporated® has announced it has entered into a definitive agreement to acquire the U.S. operations of IO Data Centers LLC, a leading colocation data center services provider based in Phoenix, Arizona, for $1.315 billion plus up to $60 million based on future performance and subject to customary adjustments.
Read More
More Articles Tagged with 'deals'
Subscribe For Free!
More Videos

Catering to the Hyperscale Tenants

Breaking Down the Data Center Hierarchy

Optical Cabling in the Data Center: Preventing Problems Through Testing

This issue of Mission Critical, we focus on cabling solutions, total cost of ownership, the real cost high-speed migration, hybrid IT strategies, and more. The 2020 Buyer’s Guide is also featured for your convenience.