Julius Neudorfer
No Comments
KEYWORDS PUE
Order Reprints
It is the end of June in Forest City, North Carolina, a small town located only 10 miles from the border of South Carolina, an area known for its high heat and humidity during the summer.  The sun is blazing down on Facebook’s newest data center and the ambient air temperature has already reached 93°F by noon and was still rising. The sun heated the adjacent blacktop leading up to the site, to a sole scorching 143°F.  Not exactly the ideal place where you might want to build and operate a multi-megawatt data center, just using outside air for cooling.

I had the opportunity and pleasure of touring Facebook’s new Forest City facility in the last week of June.  I was given an in-depth tour by Keven McCammon, Lead Data Center Technician.The 150 acre site has one building completed and another still under construction, each is approximately 350,000 sf with 150,000 sf of data halls. The first building was started in November 2010 and began system commissioning in December 2011.

In case you are not aware, Facebook’s first company owned data center was built in Prineville, OR last year and was extremely energy efficient. It had a claimed PUE of 1.06, it was, and still is very near the theoretically “perfect” PUE of 1.00.  However, in less than a year since that site was completed, they have gone on and planned to match or improve on it in their second site, however building it in a climate with much higher peak temperatures and a wider humidity range.

The first Forest City building has been operational since April 2012. It essentially uses the same basic cooling system design as their Prineville data center. However, they have made some changes and improvements to the network and computing hardware. Virtually all the servers now have end-to-end fiber connectivity directly to the backbone switches (perhaps more on this in a later blog).

When you walk into the lobby you can’t help but notice the large monitor showing the real-time PUE and WUE, as well as the various temperature and humidity readings, both outside and at various points inside the data center. Not something you see in most other data centers lobbies, and perhaps this level of detail is sometimes never revealed at all in most typical data centers. 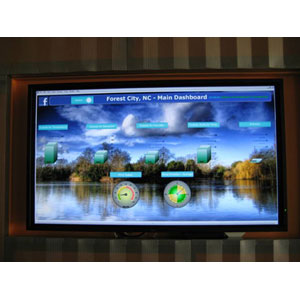 So as the outside air temperature quickly rose from the low 80’s earlier in the morning, the building’s long wall of water mist injectors began to spray more purified water into the entering outside air, which was being drawn into the long penthouse air intake chambers by the hundreds of relatively small variable speed fans. No mechanical cooling was being used, just a long wall of atomized water misting nozzles (aka “Free Cooling”). This is the heart of the adiabatic cooling system used to lower the temperature of the air to the 148,000 sq. Ft. data center area below on the main floor.

At High Noon the intake temperatures in the data center hall (no raised floor here, it is all on slab), were holding at approximately 82°F and 65%RH.  The reaction from the facilities and IT staff was a little surprising. Unlike most other data centers, to them this was perfectly normal!

The Bottom Line (well, Not Quite Yet..)

There is more to this story yet to come, when Facebook’s air side free cooling system is put to the test in the first weeks of summer in North Carolina. So stay tuned to hear what happens when the outside temperatures break 100°F and as the old adage goes “it not the heat, it’s the humidity..”