Sustainability at the ‘Mountain Crystal’

The Monte Rosa Hut is a distinctive landmark in the Valais Alps in Switzerland. Thanks to a photovoltaic system integrated into its southern façade as well as thermal solar collectors, the Monte Rosa Hut has been largely self-sufficient since construction was completed in 2010.

Using the Siemens Navigator system, data on building performance, energy consumption, and solar-generated energy can be analyzed and evaluated at all times, and the Siemens Desigo CC integrated building management platform controls the Crystal efficiently and reliably. 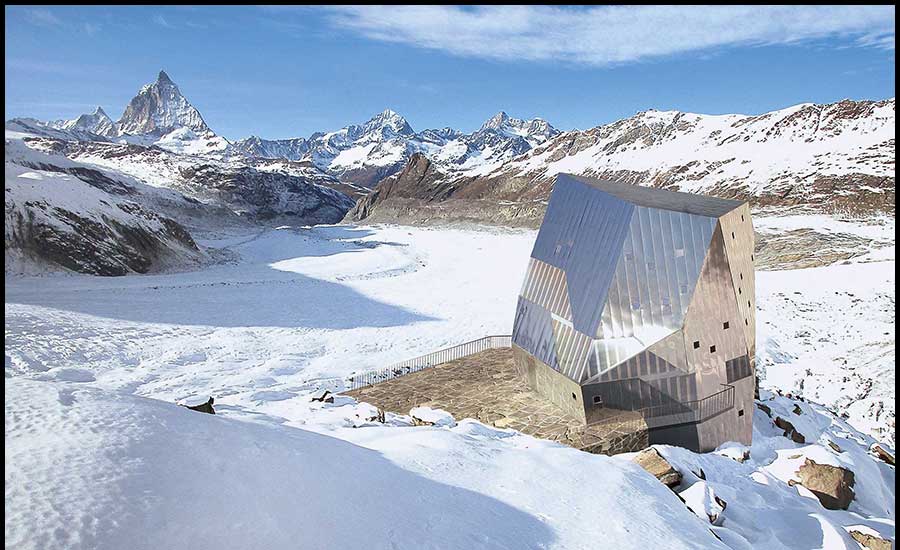 Navigator’s energy flow monitoring showed that the existing lead batteries had reached the end of their lives, because, among other things, the combined heat and power plant had to recharge the batteries more and more frequently in recent years. Siemens was awarded the attractive contract to design the entire turnkey solution and replace the 48 lead batteries with 14 lithium-iron phosphate (LFP) batteries with a capacity of 215 kWh.

The project’s biggest challenge was to haul away the existing batteries, properly dispose of them, and install the new ones at an altitude of 2,883 meters above sea level. The approximately 8.6 tons of lead batteries had to be transported out by helicopter, and 2.7 tons of new lithium batteries were flown in. It took local air carrier Air Zermatt 25 round trips to complete the job. To ensure hassle-free commissioning, two of the 14 batteries were tested ahead of time in the valley in cooperation with a local Siemens partner company to make sure they would work smoothly when connected to the Desigo management system. This advance test allowed the installed batteries to be connected to the energy supply system within just two days.

Compared to the old batteries, the new ones have a longer life and a higher recycling rate. The combination of Desigo CC and Navigator makes electricity production and remote monitoring completely transparent. It is now possible to optimize the use of the locally generated, environmentally friendly solar power. The new battery solution has pushed the hut’s energy self-sufficiency to even greater heights by lightening the load on the generator used in bad weather. The completed project considerably boosts the Monte Rosa Hut’s secure, energy-efficient, and sustainable energy supply at any time of day and in any weather condition.