Grok Energy Services Inc. was tasked with identifying the most efficient cooling solution for a telecom provider’s older equipment facilities.

The equipment had been cooled using metal ductwork and flexible, 8-inch hoses pulled through a seismic grid above the racks. The false ceiling also supported the substantial wiring connected to the equipment, and space was tight.

The solution had several shortcomings, especially temperature fluctuations across the room. The metal and hoses provided no way to precisely direct the airflow or stop it where it wasn’t needed. The hoses obstructed work above the grids, and, in places with high wire congestion, they were impossible to get through the grid.

Over the years, the conclusion was reached that it was impossible to achieve even cooling air distribution using the old standard approach.

Numerous possible solutions to the air distribution challenge were identified before settling on the FabricAir system. 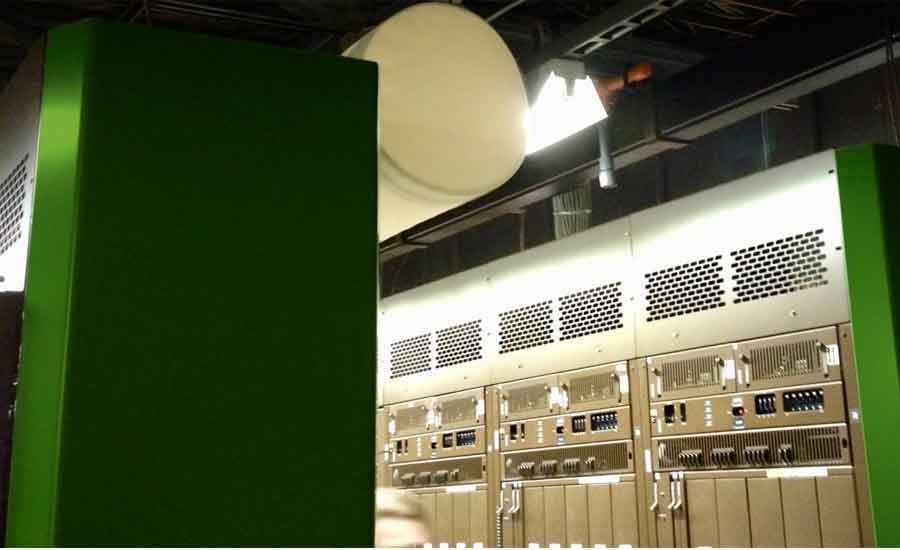 Numerous possible solutions to the air distribution challenge were identified before settling on the FabricAir system.

The solution consists of four, light grey ducts in Combi 85. SonicFlow™ ensures optimal air dispersion with no temperature fluctuations, while FabFlow™ allows approximately 2% airflow through the fabric, preventing dust or dirt from settling.

The ducts are suspended beneath the seismic grid using Type 8, which permits easy temporary disconnection if the ductwork is in the way of maintenance or repairs.

A 16-inch round duct connects each section to the metal duct above to maximize flow. To do this, only four grid penetrations were required compared to well over 50 using the old hoses.

This solution was a proof of concept and the results verified the FabricAir system is a viable option in facilities with legacy equipment.

“Removal of the flex duct hoses has made movement up on the grid much easier, and it eliminated the risk of the hoses being damaged or moved,” he continued. “The FabricAir ducts are high enough to walk under, and thus not in the way. Should it ever be necessary to temporarily move the ducts when checking or working on any of the DMS equipment, it is as simple as unzipping a section and sliding it to the side.”

Is South Florida the Next Silicon Valley?

2021 State of the Data Center Industry

The Race To Net Zero