The Evolution of Thermal Management

How to meet new design standards and customer expectations

While many data centers have embraced newer cooling technologies that are inherently more efficient than the systems of the past, outdated control strategies aren’t enabling these systems to deliver precisely the right amount of air to equipment racks with the greatest efficiency. A new control strategy has emerged that enables this level of control, but it means letting go of a practice that has served the industry for many, many years — managing cooling based on changes in pressure (Delta P).

Changing Strategies for a Changing Industry

This practice dates back to when the raised floor dominated data center designs and played a central role in thermal management. Using the charts developed by floor tile manufacturers, it was easy to correlate airflow based on the percent of perforation on a particular tile and the pressure differential across the tile. If more air was needed at a particular location, tiles with larger openings were  selected or tiles were added in the cold aisle. If more airflow was needed across the whole space, Delta P was managed by increasing the cooling unit fan speed to increase airflow.

Measuring pressure within the contained, uniform space beneath the floor was straightforward and proved to be an effective control strategy. So effective, in fact, that pressure remains the dominant control metric in many data centers today, despite three fundamental changes that make it far less useful than it once was.

The first of these changes is the shift to slab data centers, which has been driven by the need to develop new capacity faster and more cost-effectively. With a slab data center, floor tiles aren’t used as a control mechanism, which creates completely different airflow patterns, especially when hot aisle containment is used. Instead of moving air in the underfloor “duct” to an open floor tile in front of the rack, air is moving across the aisle in front of all racks. The high air velocity required to blow air the length of the cold aisle decreases as air travels down the aisle. This creates large pressure variations and makes it difficult to establish a good pressure measurement point, such as one that exists beneath a raised floor. It is possible to deploy multiple pressure sensors and calculate an average pressure for the entire space; however, this is challenging because pressure sensors can be expensive, difficult to set up, and they require regular tuning. For most applications, it’s not worth the effort because, even with multiple pressure sensors, the fundamental problem remains: Pressure is not a reliable surrogate for airflow, since there is not a direct relationship between pressure and the airflow needed at each rack.

In a non-raised floor environment air pressure will vary across the aisle as the air loses velocity.

The second change is the increased importance of data center efficiency and the continuing evolution of service level agreements (SLAs). When Delta P was first established as the dominant cooling control strategy, availability was really all that mattered to data center operators, and overcooling was common. Since then, of course, operators have become more focused on reducing data center energy consumption for cost and environmental reasons. That means consistently operating the data center at or near the design intent — the system efficiency based on the defined cooling system operating points. Delta P does not enable this.

SLAs have evolved in a similar fashion. Today’s SLAs not only specify a certain level of availability but also the temperature of the air entering the rack. Managing to pressure provides no way of ensuring temperatures at the rack meet the SLA. In addition, PUE is integrated into most SLAs, which creates further pressure to manage to the design intent. Yet, the cooling system airflow control methods used today almost universally drive the fan speed, and thus the airflow, too high. The result is wasted fan energy and poor cooling unit efficiency because of lower-than-design return air temperatures.

Finally, control and sensor technology have continued to evolve to the point where it is possible and practical to control data center environments using temperature rather than pressure as the dominant control metric.

The thermal unit airflow is managed to operate to the system Delta T. If the return air temperature is too high, the control will speed up the fans; if it is too low, it will slow down the fans. Generally, a temperature control point is set about 2° above the supply air temperature leaving the cooling unit. This ensures enough airflow is reaching each rack without warm air recirculating back to the front of the rack. This approach, coupled with temperature measurement at the rack, maintains efficiency and meets temperature SLAs — Delta T is adjusted based on remote rack temperature needs, but the controls recognize and provide alerts when the system is deviating from the design intent. 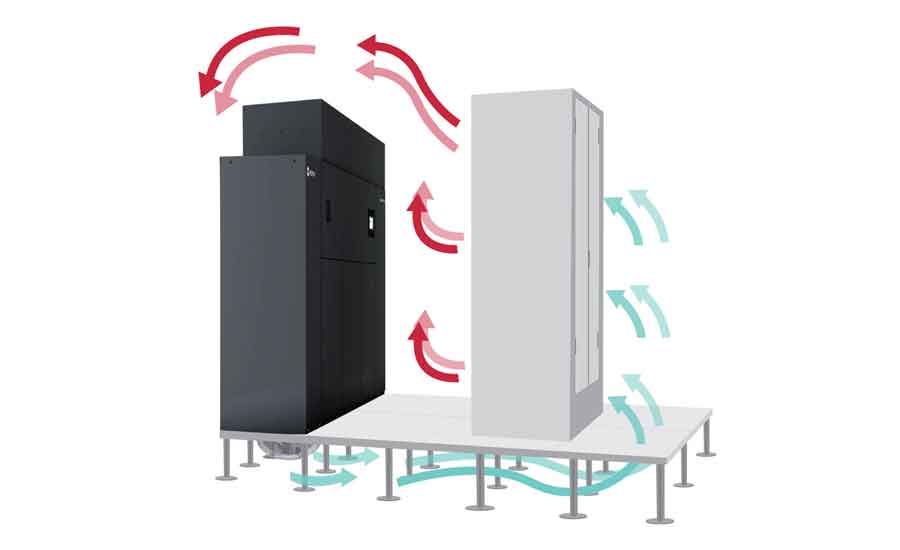 Click image for larger version
Delta T represents the difference in temperature between the air entering the data center and the return air as measured by the cooling system.

Temperature sensors  are available in wired or wireless configurations, and they can be easily deployed across the row at three-to-five rack intervals to precisely measure temperature and humidity at the point where it matters most: the front of the rack.

These sensors, when used for control, are connected to gateways that aggregate data from multiple sensors and communicate with a software-based thermal management control system. The control system automatically manages the cooling system to maintain temperature and pressure at the rack within narrowly defined windows while optimizing system efficiency. This combination of temperature sensors and control algorithms provides the visibility and intelligence needed to efficiently control airflow to a temperature that can be linked to an SLA.

Maintaining proper environmental conditions within slab data centers doesn’t have to be complex — it’s a matter of matching the right metrics with the optimal control strategy.

Steve has more than 30 years of experience in the cooling industry and currently serves as a global vice president of Thermal Management at Vertiv™ . A true engineer at heart, he travels the world helping customers and prospective customers meet their unique cooling needs. He is a member of ASHRAE and holds a bachelor’s degree in mechanical engineering from Bucknell University and a master’s degree in business administration from the Wharton School of Business at the University of Pennsylvania.

Flycoin names Anchorage Digital as a custodian for its token, FLY