Lessons learned from the cable industry

The age of the internet has revolutionized so many day-to-day and business activities that it is hard to imagine life without it. Everything from online shopping, digital databases, and video conferencing to driving directions, social media platforms, and telehealth are activities previous generations could only dream of. The data centers tied to these activities play a vital, often hidden, role. These critical facilities at the heart of so many modern conveniences are expected to simply work without interruption — even in the face of natural disasters, power outages, and pandemics.

In the cable telecommunications industry, there has been a focus on electricity system resiliency to prevent power disruption during outages and ensure the rapid restoration of electricity to reduce the fallout of disruptions in critical facilities. While diesel generators are a viable solution for backup power, in the past five years, renewable energy (RE) has played an increasingly important role in building resiliency in these facilities.

The cable industry’s recognition of the importance of lowering energy consumption, cutting energy costs, and reducing dependence on the grid, combined with increased threats to power continuity due to increasing natural disasters and the decrease in the cost of RE, has moved the industry in this direction. The lessons learned along this journey have important implications for data center operators everywhere.

Data centers can scale from a few kilowatts to many megawatts, and the criticality of these facilities often challenges data center owners to maintain close to 100% uptime. A data center often has redundancy built in with many paths to the internet and dynamic internet protocol (IP) routing architecture for availability. What about power redundancy? In some of the larger centers, there might be multiple utility power feeds to the building to address the foundation of this availability. And many facilities will have generators to provide back power self-generation for a period of time. But, renewable self-generation in the way of solar power is a viable option to improve data center resiliency by creating a renewable source of backup power.

Photovoltaic systems (PV) that were once reserved for NASA and space application are now available for commercial application. Data centers are good candidates for PV system deployments for a number of reasons. Often the building housing the compute power is constructed to withstand above-average environmental stresses, and the roofs of these buildings are typically flat, large, and suitably positioned for solar generation. 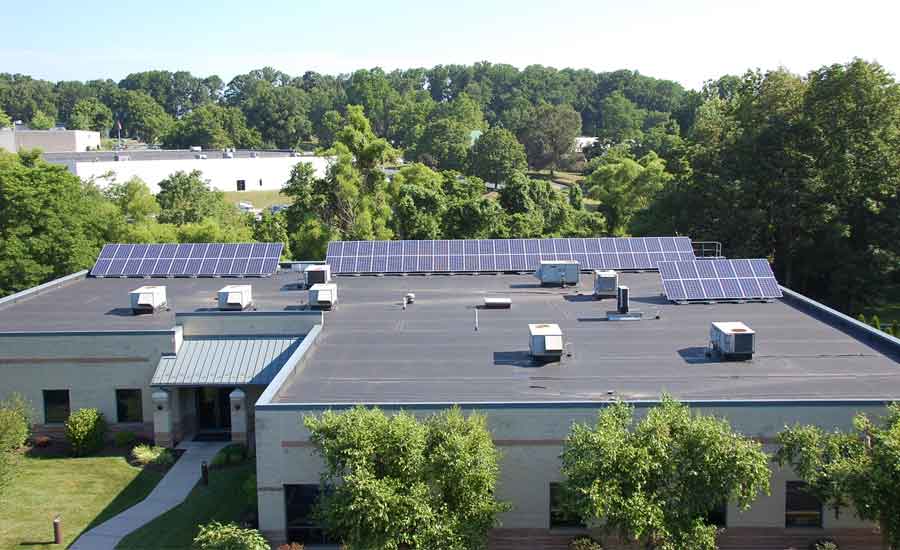 Monocrystalline solar panels, as of time of production, can produce an average of 150 W to almost 400 W per panel. When strung together on the rooftop, these systems could produce enough to provide backup power generation for a moderately sized facility for extended periods of time.

During a utility outage and average daytime conditions, our autonomous runtime for critical load is approximately five days. The inverter is programed to control the flow of power with the following priorities: solar, grid, generator, and batteries. With this configuration, we can offset our dependency on the grid to reduce our operational utility costs and carbon footprint while extending the life of the generator when utility is absent. As an anchor, the batteries can also provide seven hours of runtime to the critical load.

In addition to this test site, our cable industry telecommunication service providers Comcast, Charter Communications, and Cox Communications have also embraced solar power to help ensure power availability and reduce their dependency on the local grid.

Today, due to the many advantages of RE, the industry is exploring how to deepen deployment of solar systems for mission critical systems. A 2017 study conducted by the U.S. National Renewable Energy Labs (NREL) illustrates the advantage of solar tied to critical load. In this study, researchers found data center buildings have energy storage in the way of battery and generators. Tying the solar production to these systems could extend generator runtimes, maintain uptime with battery and solar in the event fuel was exhausted, provide operational savings, and improve reliability. When PV and battery storage is sized appropriately, valuable generator fuel could be conserved during daytime hours in case of a utility outage. Some may call this setup a microgrid; I would call this setup peace of mind with environmental friendliness.

Data center cooling costs and energy use play a big role in overall demand for power. Heat mitigation via forced air, cooling liquid loops, and towers require up to 40% of the overall energy use of the building.  Grid-tied solar could be used to help offset that energy demand even if the solar system is not incorporated into critical power distribution. If the data center total utility load is 1 MW and if cooling represented 40%, then 400 kW would be spent to maintain proper operating temperatures in the critical space. If the building could accommodate 200 kW of solar, that would reduce a significant amount of grid demand and possibly reduce peak utility charges resulting from keeping air temperatures within acceptable operating range.

Derek DiGiacomo is the senior director of energy management programs and business continuity at SCTE•ISBE, the not-for-profit member organization for cable telecommunications. Under DiGiacomo’s leadership, SCTE•ISBE has seen a 50% reduction in the dependency of grid power using a renewable power-based microgrid that extends critical system runtime to seven days on average.