Complex projects like data centers typically do not take a design-build approach. But in 2019, team members at Granger Construction, Integrated Design Solutions (IDS), IBI Group,  Motor City Electric, and Conti Corp. made history, as their design-build data center project became the first in the state of Michigan to receive Uptime Institute’s Tier III Certification for both design and constructed facilities.

Not only was this project the first of its kind completed in the state, the owners also tasked the team to complete the design phase within a challenging 12-week sprint and construction in just over a year. In the following case study, the project team shares best practices and lessons learned from their experience.

“When designing this project, we faced many challenges beyond planning for Tier III certification,” said Joanne Kulbacki, senior project manager for Granger.

Multiple Decision-Makers — As an enterprise data center for an International Fortune 500 client, this project included a number of stakeholders whose interests needed to be coordinated. The owners had many individuals involved in approving each decision, including leaders from the IT group, facilities design, engineering, security, and risk management divisions.

Aggressive Timeline — The goals for the design schedule were very ambitious. The request for proposal (RFP) asked for a design-build approach based on limited criteria, and included no drawings. The owners also proposed a 12-week design timeline and asked Granger to develop an operational strategy to complete the design according to the limited RFP criteria.

New Standards — Typically, design-build projects are designed based on project requirements outlined in the RFP, with little further input from the owner. However, this project was the owners’ first data center, and they wanted to ensure it was designed and built to the latest industry standards. They also wanted to maximize flexibility for future IT innovations, allowing them to use this design as a template for future data centers. To accomplish this, the Granger team needed to help the owners establish design standards and specifications for a building category completely unfamiliar to them. Together, they worked through 39 critical design decisions.

One of the most critical of these design decisions was the UPS system. Not only did it influence the layout and size of the facility, but it also allowed for the UPS equipment to be purchased during the design phase, which ultimately helped reduce the construction schedule.

“Designing an enterprise data center in only 12 weeks is a nearly impossible task,” said Kulbacki. “But the biggest reason our team was successful was our operational strategy and agility.”

Three-Week Batching — To start, all critical design decisions were organized into a series of workflow batches that cycled through a three-week decision process. Week one introduced a new item that needed a decision, and, together, they brainstormed multiple options or solutions. During week two, Granger presented a detailed analysis of the options, including cost. All questions were answered in week three, and then the owners made a decision. Each week, the team started a new three-week cycle.

“The ability of the design team’s partners to step back with an open mind and objectively analyze the owners’ data center needs as new concepts were being evaluated, weighing the functionality, budgeting, and validating long-term goals, was critical to achieving a successful design,” said Ray Fortier, Motor City Electric team member.

The UPS system was one of the first items presented. During week one, Granger worked with the owner to establish several UPS system options, including transformer-based static, transformerless static, and rotary. Stored energy options, such as vented lead-acid (VLA) batteries, valve-regulated lead-acid (VRLA) batteries, and flywheels, were also included. Analysis was presented on week two, and the owners made a decision on week three. The three-week batching process permitted the owners to make an informed decision on a very complex topic in a relatively short time, which enabled Granger to purchase the UPS equipment early in the design phase.

Click image for larger version
All critical design decisions were organized into a series of workflow batches that cycled through a three-week decision process.

Weekly Meeting Flow — Throughout each three-week cycle, an effective weekly meeting flow was utilized. Every Tuesday, Granger’s design team met with the owners to:

A plus/delta survey was conducted at the end of every meeting to ensure value was added. On Wednesdays, the team of 25 professionals (engineering and trade partners) set the agenda for the following Tuesday meeting based on the 12-week plan and any owner feedback. Then they conducted discipline-specific breakout sessions per the agenda, where they developed solutions/options that included cost, schedule, and cost-of-ownership analysis. The remainder of the week (Thursday – Monday), short huddles lasting 15 to 60 minutes were held to prepare for the presentation with the owners.

“These rapid-cycle, multidisciplinary design team meetings eliminated an end-of-phase ‘throw it over the wall mentality’ and permitted analysis of constructability hand-in-hand with design decisions,” said, David Giroux, project manager for IDS. “This weekly pattern also kept the team focused and coordinated, while setting a precedent early in the project for fast and efficient decision making.”

Key Participation — “One of the biggest factors for success with our design workflow was having the right people in the room when we needed them as well as the outstanding coordination and chemistry between the owners, construction manager, design team, and trade partners,” said Justin Kiriazis, PE, electrical enegineer, IDS. “Our design team had subject matter experts from Motor City Electric, Conti Corp., and other trade partners and vendors to tackle specific challenges in preparation for the Tuesday owner meetings. This meant we could have ongoing constructability discussions during the entire design phase, along with access to continuous, accurate cost information based on proposed design options.

For instance, Conti’s mechanical director, Vic Calleja, and senior mechanical estimator, Jon Tkac, noted it was especially effective being able to work with the team early to gain valuable feedback about the mechanical system requirements.

“After identifying the owners’ mechanical needs, such as the capacity of megawatts required, we dovetailed a mechanical system to achieve the proper cooling required, along with redundancy in the event of any type of catastrophic failure, to ensure the equipment would operate without skipping a beat. Working with our team partners, we were able to accomplish this monumental task and came up with our final mechanical design that achieved the Uptime Institute Tier III certification requirements.”

“Another key to our team’s success was utilization of various visual communication tools,” Kulbacki said. “With so many decision-makers and stakeholders involved, we needed to ensure even the most specialized technical details were communicated in a manner everyone could understand. To that end, we used simple diagrams/pictures to cover a variety of topics and ensure equal understanding among all owner participants, regardless of area of expertise.

Click image for larger version
BIM was used to explore the data hall layout and determine the best access route to chilled water piping underfloor and access points for maintenance.

Choosing By Advantage — As we cycled through the three-week batch process, our design team used Choosing by Advantages (CBA) to help the owners arrive at decisions for the complex topics. For instance, when choosing the UPS system, the owners were presented a CBA matrix with five UPS options and attributes listed for each option based on nine categories. The attributes were weighted based on the level of importance to the owners. A chart of the CBA results and the total cost of ownership allowed the owners to visually see the flywheels option was the best solution. The CBA process made the owners feel more confident in their decisions and helped streamline the decision-making process. 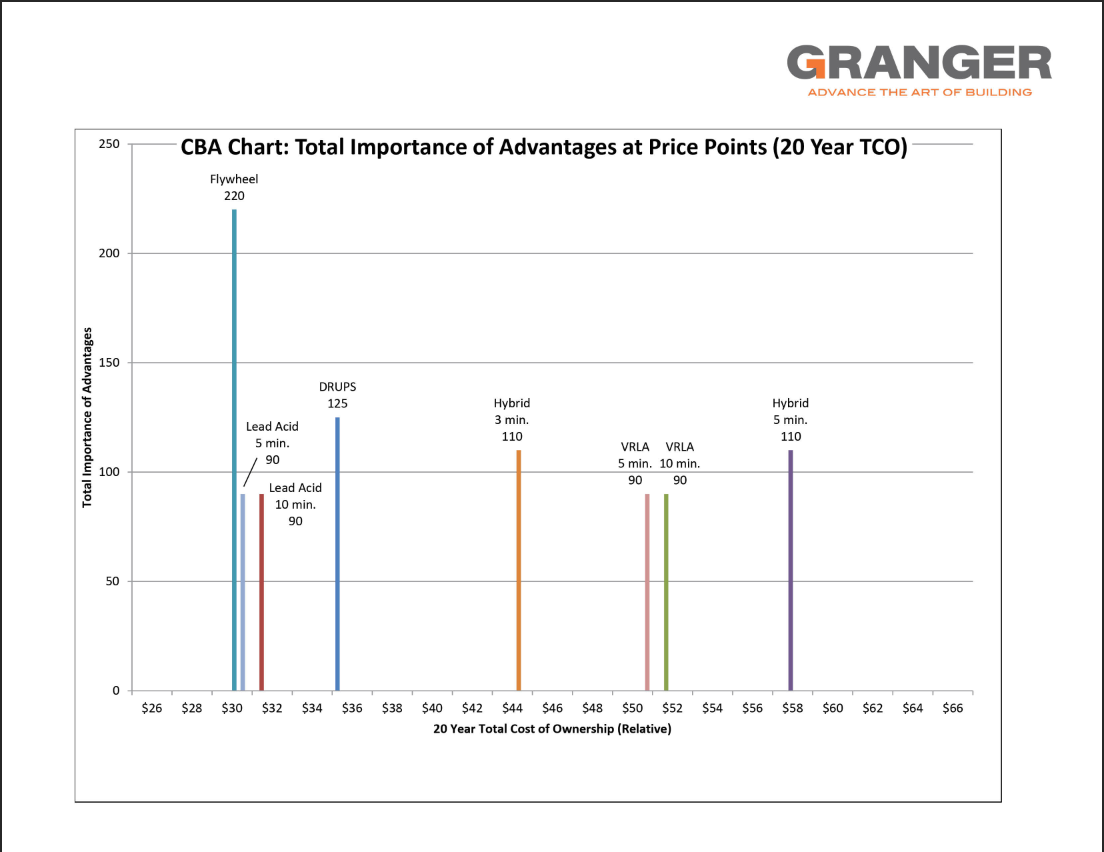 “Our team is proud of what we accomplished with this challenging design-build project,” Kulbacki said. “But one major takeaway we learned and would stress for future project teams is to plan ample contingencies for when things change.” 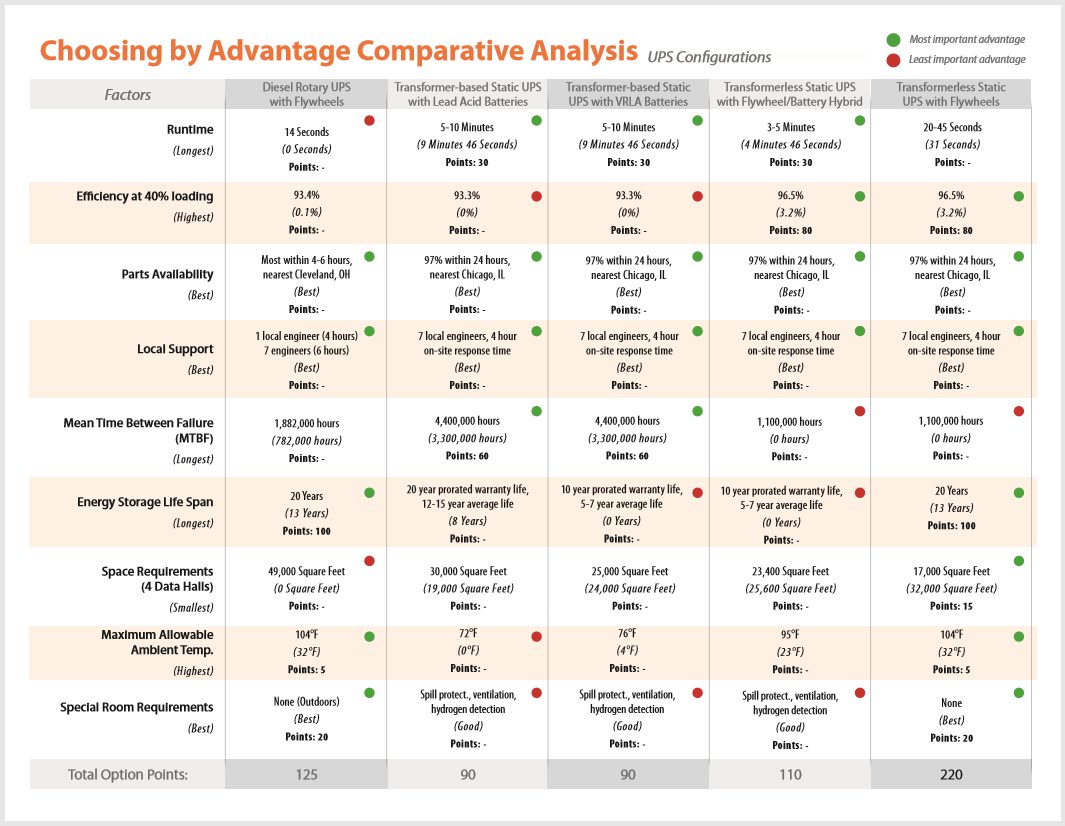 Click image for larger version
When choosing the UPS system, the owners were presented a CBA matrix with five UPS options and attributes listed for each option based on nine categories.

Dispel the misconception that there is no room to change or alter decisions/design with a design-build approach. Things change on every project, and the best practice is to create a contingency plan to absorb these changes. It is vital to establish clear goals and key decision-makers at the start of the design period. However, revisit and recalibrate these goals and role clarifications as design and construction of the data center progresses. Just like anything in technology, what is great today could be outmoded tomorrow.

Begin in the design kick-off meeting by explaining why it is important to clearly define individual roles/responsibilities and designate the final decision-makers.

The owners may not know exactly what they want at the start of the project, or there may be information gaps in the RFP.

This is especially true for anyone striving to obtain Uptime Institute Tier Certification — the entire team, including the owner, must be in agreement about which certification elements to pursue.

“Our design-build approach, workflow, and team synergy allowed us to take an aggressive design schedule and achieve not only Tier III Certification for design but also for construction,” said Kulbacki.

“The Uptime Tier Certification process was invaluable to the success of our project,” Kiriazis said. “Senior Consultant Scott Good went above and beyond to help our design team navigate the Tier Standards during design and construction of the facility. His expertise ensured the client’s expectations for a top-quality Tier III facility were met.”

“It was an honor to be part of such a one-of-a-kind, monumental feat,” added Calleja and Tkac.

Advantages Of Design-Build In A Data Center