Reliability off the grid

Sitting 8,000 feet above sea level, the Granjas Carroll pork processing plant in Puebla, Mexico, is a powerhouse of production. As part of one of the country’s largest pork producers, the facility has the capability to process 1.5 million hogs per year. With such a heavy rotation of output, having reliable, consistent energy with no fluctuation in voltage or frequency is critical.

But when the plant was first being built, having reliable power — or any power at all — was an uncertainty. Under the initial plans, the new facility was to receive service from the local electricity company. As the project got underway, word suddenly came that the local provider would not be able to provide power after all. This left the project managers in a scramble to construct a completely independent power plant that could operate off the grid in full island mode.

That’s when the Granjas Carroll team reached out to local distributed energy systems expert Electriz, S.A. de C.V. to assist them in designing a solution and to lead the engineering, procurement, and construction of the power plant project. Based on the specific needs of the plant and its 24/7 energy requirements, the experts at Electriz suggested four MTU Series 4000 gas generators sets and one MTU Series 4000 diesel generator set, all operated under one overall control system to power the plant.

This resulted in the first off-grid solution of its kind in the Americas for Rolls-Royce Power Systems, manufacturer of the MTU products.

“There were multiple factors beyond reliability that needed to be considered when deciding on power solutions for this facility,” said Daniel Salazar, president, Electriz. “Cost-effective efficiency at that altitude, while also taking environmental factors into consideration, is difficult. However, we knew that by working with MTU, we could get it done.”

“We have a vision at our company to be the most recognized and most preferred pork company in Mexico,” said Rafael Patino, director of environment and energy, Granjas Carroll. “That is a big challenge, and sustainability is one of our pillars of production, so our project came with very demanding specifications.” 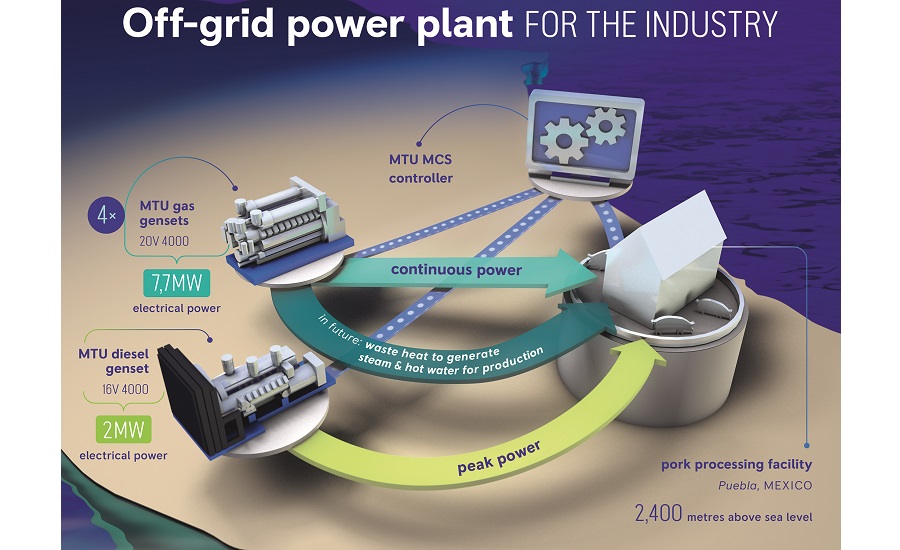 Click image for larger version
This plant has to rely 100% on its own grid, so the challenge was to deliver a complete solution that would ensure grid stability at a high level,” said Alfredo Carrasco, Latin American senior sales manager, MTU Onsite Gas Systems.

The four gas units used at the facility are 20-cylinder Series 4000 natural gas systems delivering 7.7 MW of electrical power, capable of handling the pork processing facility’s altitude demands with the lowest derating, ensuring maximum power availability at the site. In a second phase, it is planned to use the heat out of the exhaust gas, the oil cooler, and the mixture cooler to efficiently produce steam and hot water, which can then be used in the production processes.

A single 16-cylinder Series 4000 diesel generator system with an electrical output of 2 MW is tasked with absorbing greater load blocks than the natural gas units, offering long-term stability to the plant. The diesel unit will run continuously with loads as low as 10% to minimize fuel consumption, allowing the natural gas units to produce more energy. An MTU MCS master control panel integrates plant control and remote operation, and all systems run in isolation from the power grid, providing reliable, stable and efficient electrical power to the entire facility.

“This plant has to rely 100% on its own grid, so the challenge was to deliver a complete solution that would ensure grid stability at a high level,” said Alfredo Carrasco, Latin American senior sales manager, MTU Onsite Gas Systems. “The reliability and efficiency of our systems, along with the ability of our team to meet the stringent requirements of gas, diesel, and an integrated control system from a single supplier were major factors in us supporting this project.”

With the help of the flexible MTU systems, the plant will have the ability to double its capacity in the future by connecting the power plant into the grid.

“With the success of this project, we now have the goal to eventually operate our power plant on the grid,” said Manuel Rodriguez, energy specialist, Granjas Caroll Mexico. “MTU’s technology is a key factor in us achieving this, and it will allow us to increase our power generation and provide sustainable and clean energy to our neighbors.”

At a later stage, there are also plans to use biogas from livestock waste as another source of fuel to operate the plant.

“There are a lot of good companies out there, but when you have a problem and a company proves that it is dependable, quick, and thorough in responding, you don’t want to do business with anyone else,” said Salazar. “The name of the game in the power generation business is both efficiency and availability, and MTU’s solutions offer both.”