The modular approach is a disruptor today, but it could be the default of the future

The data center industry is continually looking for ways to improve efficiency, reduce energy costs, and maintain uptime. A range of emerging technologies promises to improve efficiency and effectiveness.
Enter prefabricated modular (PFM) data centers. Rather than relying on on-site construction like conventional data centers, PFM involves assembling units or modules of data center infrastructure in factories and then shipping them to the site. This was introduced to the industry at least 10 years ago, but the technology itself has been around for a lot longer. Even so, it continues to evolve and grow.

Disruption in the data center industry brings a multitude of challenges, but one primary concern is universal: how to manage unpredictable growing demand today while remaining flexible for tomorrow. Growing edge compute use cases potentially require vast volumes of medium to small (or even micro) data centers to manage the workloads associated with an explosion in demand related to the IoT. Edge site deployments could range from a 5-MW facility in a city to a single, hardened rack next to a 5G mast on a building rooftop. 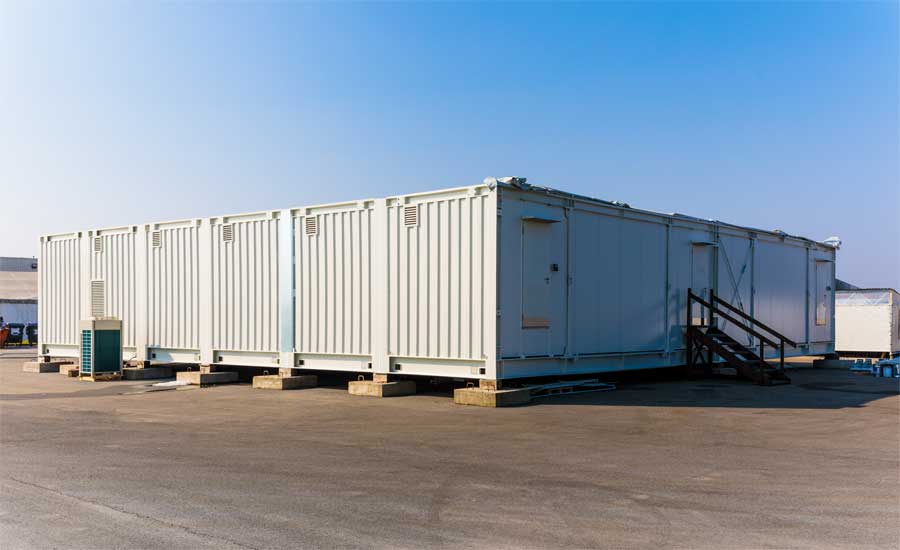 This Tier III-compliant data center system was prefabricated, integrated, and tested in Vertiv’s European facility. It was then packed in 12 shippable units and sent to South Africa where it was assembled on-site in under six weeks. Photo courtesy of Vertiv
In the past, conventional construction processes have been the default choice simply because there has been no viable alternative. However, traditional methods can’t meet the accelerated development requirements and timelines of dynamic organizations and often don’t factor future growth into the design. By relying on these processes, companies have either had to deploy capacity before it is needed — creating risk and stranding capital — or consistently remain a step behind their capacity requirements, limiting growth.
Prefab units can be deployed to add additional power or cooling capacity to new or existing sites that may have sufficient white space but are constrained from a thermal or resiliency perspective. At new sites, the modular design allows the data center operator to deploy critical power infrastructure in a prepackaged way, independent from other construction activities. For existing facilities, the module deploys outside the facility without taking up expensive floor space that could be used for IT equipment. Operators also can utilize the module in a site architecture that is hot-scalable, meaning you can add capacity by simply adding additional units without taking the critical loads offline.

Designing, configuring, and fabricating data center infrastructure off-site is creating tighter integration across systems, streamlining processes, and enhancing management.
Another powerful benefit of PFM data centers is that they leverage economies of scale and streamlined processes to enable faster deployment and maintain business flexibility.  The economic benefit of PFM is often incorrectly identified as lowered costs when the reality is more complex and better viewed as increased value — shortening the time from making an investment to having capacity online can flip a business case around. 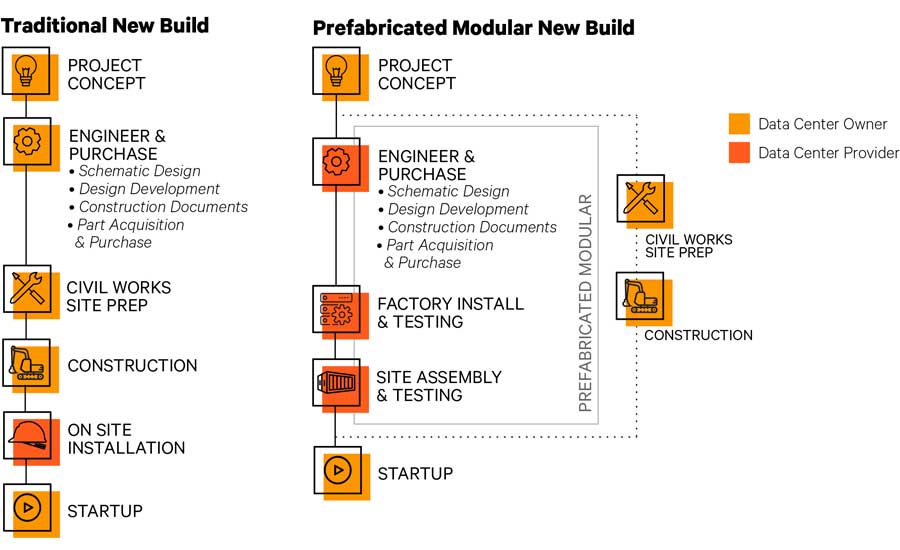 This timeline shows the process for a traditional newbuild data center versus a PFM new build. Photo courtesy of Vertiv

By definition, PFM solutions are portable; however, that has no bearing on physical security or resiliency. When surrounded by the same barriers as conventional builds (guards, fences, etc.), PFM facilities are just as secure. Integrated components also means that maintenance problems are reduced. And, finally, regarding resiliency, the Uptime Institute developed its Tier-Ready program to streamline the certification of facilities built in part, or in total, using PFM components.

A Variety of Solutions

PFM designs include subsystems, such as thermal management, power protection and distribution, controls and management software, and services — plus ancillary systems, like lighting, fire protection, physical security, and water treatment. For the expansion of preexisting facilities and retrofits, building block solutions range from single, enclosed racks to larger multi-rack, contained systems. They are custom-designed to match the geography, climate, technology profile, IT applications, and business objectives of a project.
PFM data centers offer low-risk, high-value implementations with fast delivery and easy on-site assembly — benefits that eventually could see PFM shift from an alternative and disruptive technology to the default option for new data center capacity in the future.