Don’t discover the cost of corrosion the hard way.

The increased prevalence of corrosion in storage tanks was first noticed in 2007, shortly after the introduction of ultra-low sulfur diesel (ULSD) biodiesel blends. Intense study has followed, trying to answer the questions of what has caused the increase in corrosion and how to mitigate it.

The cost of corrosion is immense. Normally, tanks last for 30 to 40 years, but many are now being replaced in as little as 10 years. Acidified fuel is damaging the injectors of emergency generators, putting the safety and health of the public at risk in hospitals and water treatment plants. Data centers face huge liability issues if backup generators fail during a real emergency, causing disruption to business.

In corrosion control, we will discuss the method to remove this bonded, emulsified water, based on the diesel industry filtration standard provided by the Society of Automotive Engineers: SAE J1488_201010. The removal of the bonded, emulsified water in the fuel column denies the microbes of the water they need for growth, thereby reducing the number of microbes present and the acids they produce. 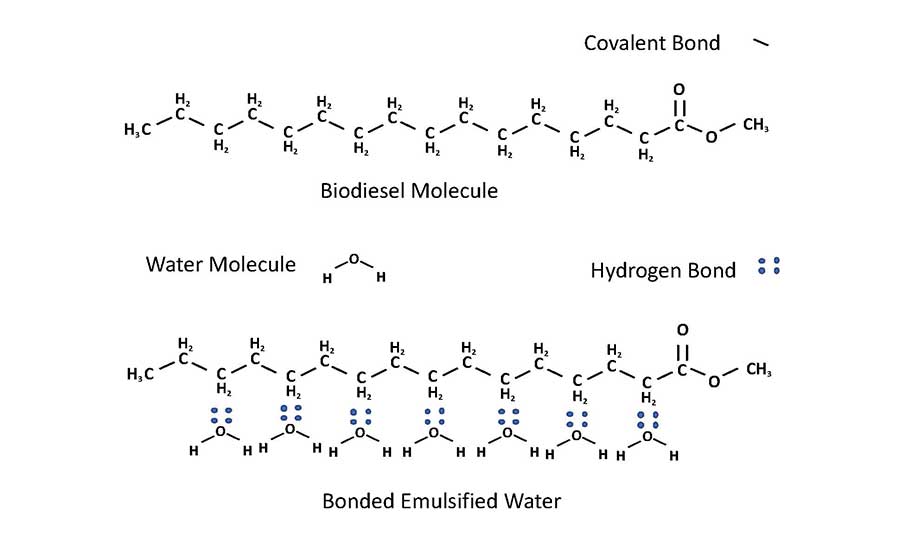 Part 1: Emulsified water moves into the fuel column and has bonded to the biodiesel.

We know from the research paper “Moisture Absorption in Biodiesel and Its Petrodiesel Blends” that 100% biodiesel can hold 15 to 25 times more emulsified water compared to 100% diesel, and it hits saturation quickly. This is because both water and biodiesel molecules are polar (they have a positive and negative end to the molecule), so the water molecules are attracted to, and bond quickly to, the biodiesel.

Note: 100% pure ULSD and 100% pure gasoline are not polar, so they do not bond to water. This is why, prior to the introduction of biofuels (biodiesel and ethanol), water was found mainly on the tank bottom. Microbial growth was mainly limited to the thin fuel/water interface.

Part 2: Microbes permanently migrate into the fuel column, as they now have the water they need to live there. This migration has greatly increased the microbe’s growth volume, resulting in more microbes, acids, acidified fuel, and corrosion. In addition, the microbes can create biofilms on surfaces that the diesel touches. This has led to the corrosion crisis we have now. 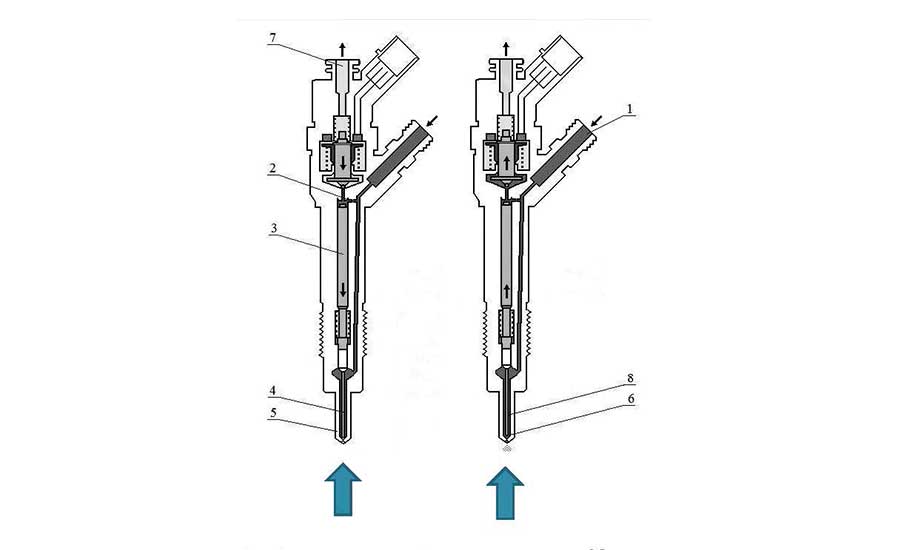 Biodiesel itself is a good source of nutrients for microbes. Think “fast-food,” with the bonded, emulsified water attached for convenience and enhanced growth.

Before 2006, microbes were limited to the fuel/water interface close to the tank bottom. This interface is typically very thin, being described as the thickness of a sheet of paper. While microbes produced acids, their number were so low that acid production was also low.

J1488 was updated in 2010 by SAE to account for the reduced interfacial tension (IFT) of ULSD biodiesel blends compared to the higher IFT of pure ULSD.

IFT is the ability of two fluids to repel each other. The high IFT in 100% pure ULSD means that water is easily repelled and precipitates out to the tank bottom. The lower IFT of ULSD biodiesel blends means more water is bonded to the biodiesel molecule and stays in the fuel column. With this hydrogen bond, the water is more difficult to remove using traditional filters.

In the second phase, the IFT is lowered to 15 to 19 mN/m, simulating a B20 ULSD biodiesel blend, and, again, 2,500-ppm water added. In this setup, emulsified water is attracted to and bonds to the biodiesel, so it is much harder to remove. This is when the hydrogen bonds come into play. In order to reduce the water to 200 ppm or below, a filter’s efficiency in breaking the hydrogen bonds to remove water will need to be 92%, (2,500 * (1- .92)) = 200. Reaching 200 ppm controls the growth of microbes by limiting the water available to them — little water, little life, little MIC, corrosion controlled. A new generation of filters has been developed to remove the bonded, emulsified water by breaking the hydrogen bonds as tested against SAE J1488.

This corrosion control mechanism is supported with field test results. Fuel samples from end users using SAE J1488 filtration consistently show storage tank bonded, emulsified water levels well below 100 ppm. Fuel samples that had been taken directly from the return lines after filtration, but before return to the tank, show as little as 10 ppm.

The only time the bonded, emulsified water is above 100 ppm is typically after a fuel delivery, which speaks to the quality of fuel delivered or when a water leak is present in the tank.

An additional benefit of SAE J1488 filtration is that if properly installed and scheduled to run on an optimal schedule, the sludge and free water that normally deposits on the tank bottom is continually removed, such that storage tanks do not need to be cleaned again.

Storage tanks are used in different situations, and some are at a much greater risk to corrosion. Major factors affecting corrosion, in addition to the level of bonded, emulsified water, are age of the stored fuel, how often the fuel is turned over, and exposure of the tanks to the elements.

The highest corrosion risk is for emergency backup generator storage tanks. The fuel is turned over very slowly; generators are typically tested on a monthly schedule for an hour or two. At this rate of fuel consumption, the tank is effectively never turned over, just topped off a few times a year. While National Fire Protection Association (NFPA) 110 recommends the complete replacement of the fuel on a regular basis, in reality, this does not usually occur. Water is continually absorbed and bonded to the ULSD biodiesel blend, and microbial growth continues unabated, acidifying the fuel and corroding the tank and components.

The risk extends from the tank to the emergency backup generator itself, as acidified fuel is corroding the injectors, greatly increasing the risk of failure during a time of emergency. A single injector failure will shut down an emergency generator. 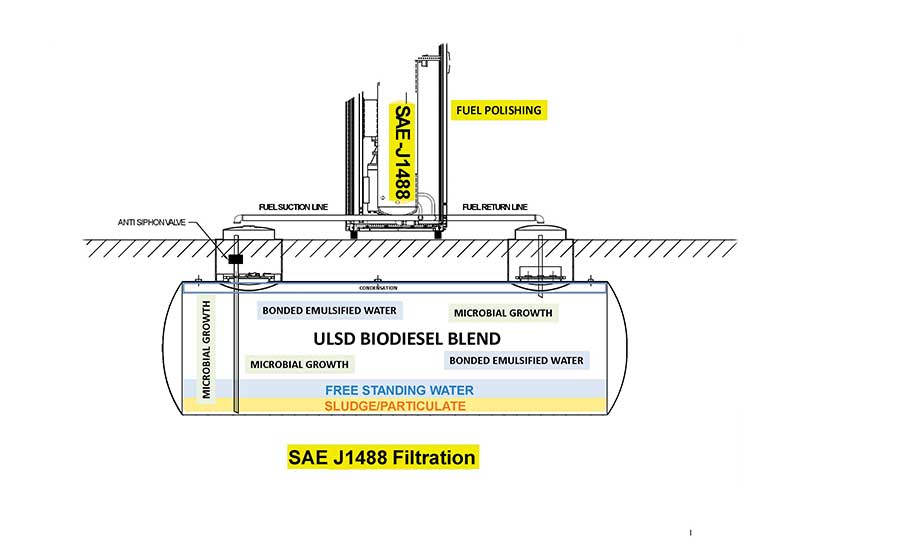 Additionally, the micron-sized injector holes and injector needles are corroding, which affects the spray pattern of the fuel into the cylinder. Each cylinder will produce a different amount of power, and the engine controls will go hunting for a stable power setting. If an acceptable setting isn’t found, the generator will shut down.

The injector tips are very hot, so excess water in the fuel flashes into steam, which further increases the damage.

Biofilms are a new threat to emergency generators. They cause generator failures due to corrosion of tank components, can clog pipes when fuel is added, and can clog filters when they disintegrate.

The corrosion risk applies to both above-ground and underground storage tanks (AST/UST). However, a case can be made that ASTs are more at risk due to the wider swings in temperature and humidity during the day/night cycle, condensing more water to be absorbed into the stored ULSD biodiesel blends, which causes more corrosion.

Diesel storage tanks are replenished often during a year. Therefore, the key factor in corrosion control is the quality of the delivered ULSD biodiesel-blended fuel. If the fuel is dry (little bonded, emulsified water), the fuel will be dispensed before it has time to absorb much water and before substantial MIC can occur.

However, if the delivery tankers are delivering fuel that already has a significant water content, MIC may have already started.

If the delivered fuel has substantial bonded, emulsified water, it may also have microbial growth and acidified fuel.

While 100% pure ULSD is blended at various concentrations with 100% pure biodiesel at the terminal, 100% biodiesel is transported to the terminal from biodiesel manufacturing locations. The 100% biodiesel should be filtered before being blended to remove the bonded, emulsified water that has been absorbed in transit.

Pat Smyth has been involved in diesel corrosion control since 2013 and has contributed to organizations such as Steel Tank Institute (STI), the U.S. Environmental Protection Agency (EPA), the Uptime Institute, and BioFuels Digest. Pat is a lecturer in BioFuelNet Canada’s Advanced Biofuels Course, hosted on McGill University’s myCourses platform, at biofuelnet.ca/advanced-biofuels-course. He can be reached at patsmyth@octanesystemsinc.com or 613-794-6090.