The number of data centers in the United States continues to grow in response to the enormous amount of digital information stored and streamed. The massive computer power within these data centers generates heat, making efficient cooling a key building system requirement. Evaporative cooling towers are an integral part of many data center cooling systems.

Recently, some have questioned the use of cooling towers, citing water scarcity to bolster their arguments. But a thorough examination of water use for local onsite cooling towers compared to water use to generate power at regional fossil fuel power plants reveals surprising results.

There are multiple ways to cool data centers, depending on the size, computer capacity that must be cooled, regional energy costs, and the data load and density. Popular options include:

To attract customers, data center operators weigh the options and look for systems that reduce operating costs and environmental impact. They pay close attention to power use effectiveness (PUE), defined as the ratio of the total amount of energy used by a data center to the energy delivered to the computing equipment. A PUE of 1 means the heat rejection power equals the power used for the computing equipment.

A surprising number of data centers still haven’t utilized aisle or cabinet containment to provide a more stable thermal environment and increase capacity and efficiency. Uncontained aisles allow hot and cold air to mix, which lowers the temperature of return air to the existing cooling units, thus reducing their efficiency.

Data center operators are also concerned about water use effectiveness (WUE). Cooling towers evaporate water, but the impact depends on location. According to Tim Chiddix, P.E., VP Mechanical Engineering at Swanson Rink, a leader in the design of data center facility infrastructure, data centers can range from a few hundred square feet to several hundred thousand square feet and no cooling technology works well for all regions, client criteria, and applications.

“Each and every facility must be analyzed to determine the approach that best meets the needs of the customer and takes advantage of energy and water savings opportunities of the particular region,” Chiddix said.

WATER USE ISSUES MUST BE EVALUATED HOLISTICALLY

The extended drought throughout the Western states has caused many companies to reexamine the impact of water usage for cooling data centers. Some have questioned whether onsite cooling towers use too much water given these shortages. In evaluating the best cooling strategy for a data center, it is critical to view water usage holistically, including water use where the power is made. When viewed in this light, mechanical evaporative cooling systems are often far more efficient than alternative dry systems.

The authors note that water is a more efficient medium than air for removing heat because evaporation enhances the cooling process, stating “Using condensing systems vs. air cooled condensing systems can significantly reduce your cooling energy costs; however, the effectiveness of evaporative cooling is very location-dependent, since the drier climate results in greater efficiency.”

They studied whether this energy reduction comes with an increase in onsite water usage due to evaporation. They also considered whether this evaporation is wasting water and whether data center owners should consider air cooled equipment instead. The evaluation compared sample data centers located in Denver, Phoenix, and Los Angeles. It examined the regional power grid to determine how much water the power companies consume to produce a kilowatt-hour (kWh) of power. Water consumption rate data from the National Renewable Energy Laboratory (NREL) technical report TP-550-33906 is shown in Table 1. 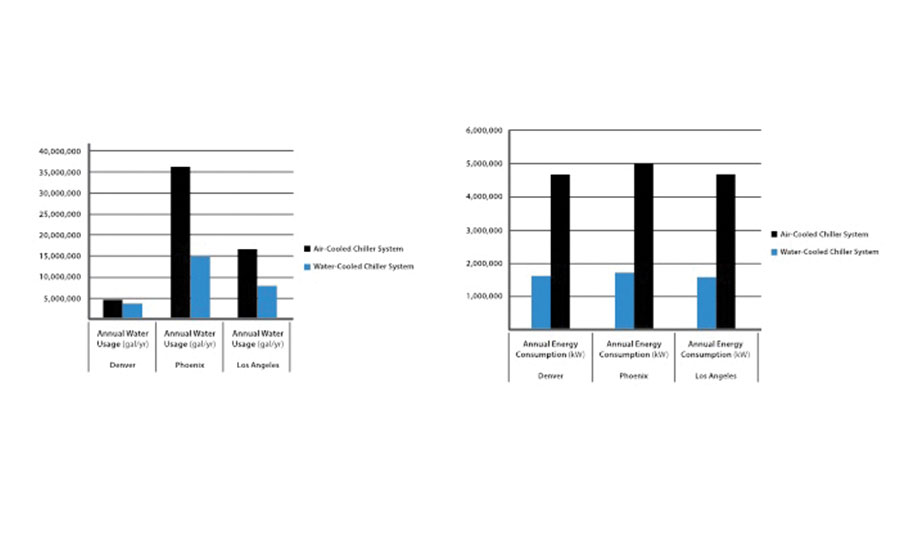 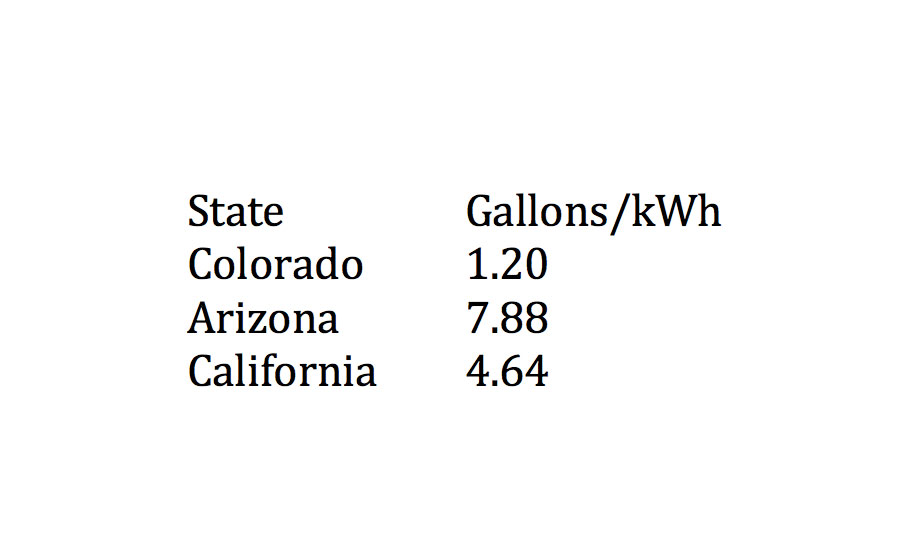 Water use, through evaporation, was based on drybulb and wetbulb temperature data from a typical meteorological year (TMY3) obtained from the National Solar Radiation Data Base (NSRDB).  The authors found that the water cooled chiller system in Denver consumed 1,610,748 kWh of energy and the air cooled chiller system consumed 4,663,740 kWh annually. 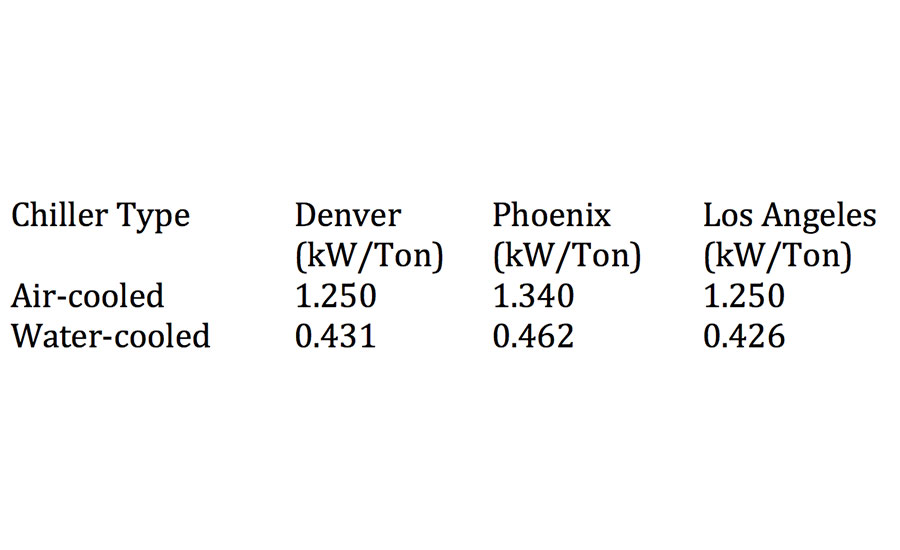 Figure 1 shows the energy and water usage for the mechanical chiller systems analyzed in each city. Water use shows significant differences because the amount of water consumed at the power generation facilities is far greater than water consumed on site.

According to Chiddix, municipalities requiring data centers to use less energy and water onsite may not have considered the full implications of these requirements. In his opinion, if the power generating plant is considered in the equation, the cooling technologies selected for the data center may actually result in more overall energy and water use.

Water cooled technologies are more efficient, particularly when “free cooling” is employed during periods of cooler weather. Free cooling, also referred to as “waterside economizer” cooling, is an economic method of using low external air temperatures to assist in chilling water. When operating in free cooling mode, the water from the cooling tower is cold enough that mechanical refrigeration by the chiller is not required. This reduces the energy requirement significantly, typically by 75% or more. To take advantage of the energy savings possible with free cooling, there must be sufficient hours of cold weather to justify the additional equipment investment for the plate/frame heat exchanger and other components. 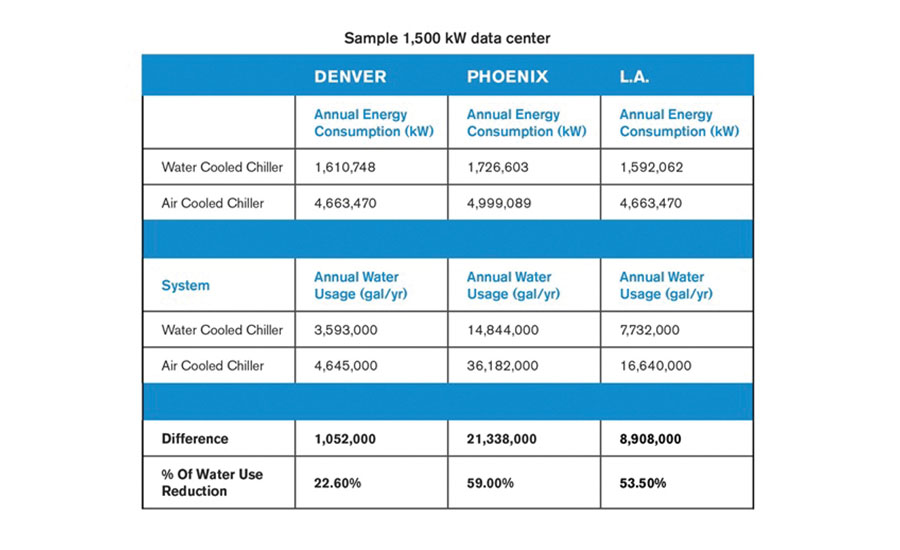 Cooling tower modularity provides another advantage. Data center owners may prefer to build out their facilities over time as server demand grows. To control initial capital expenditures and operating costs, data center operators may add cooling capacity later as needed by utilizing systems that incorporate factory-assembled modular cooling towers as the facility grows. It is important for data center construction to be completed on schedule so that servers can be operational quickly to generate revenue. Modular pre-assembled and field-erected cooling towers can meet time-sensitive delivery requirements and construction schedules.

There are many combinations of evaporative and mechanical cooling solutions that can be evaluated to meet data center cooling requirements. As the discussion of water is added to the list of design considerations, it is important to understand and evaluate the relationship between utility power and local water consumption in order to make well-reasoned decisions for achieving energy and water conservation goals.

Douglas Bougher is commercial director for HVAC and Refrigeration markets.