Identifying trends within large data sets is a key way of understanding what the data is telling you, and is critical to deciding what strategies to pursue in business going forward. In the data center industry, the growth of public cloud infrastructure providers such as Amazon, Microsoft Azure, Google Cloud, and IBM’s Softlayer is having a clear impact on the average power density of data centers and the IT racks located therein. Figure 1 is from one rack-level PDU vendor and it tells a clear story of how the IT industry is continuing to migrate towards more and more usage of three-phase power at the rack level. Also evident is a trend away from three-phase Delta and towards three-phase Wye adoption.

This article explores the fundamental differences between single-phase and three-phase power, why three-phase is more efficient, and why the data center designer should “ride the wave” by implementing three-phase power distribution in future deployments.

Alternating current (AC) is a form of electricity where the power flow is continuously changing directions. Single-phase AC electrical power is a straightforward means of delivering power from a source supply to a load performing work (Figure 2). In it, all the voltages of the supply move together in unison. Single-phase power is used where the loads to be powered are primarily resistive in nature, such as for heating and lighting applications, as can be found around the home. Light duty motors can also be powered by single-phase AC, such as the compressor in a refrigerator or a small oscillating fan used to move air in a room of the home. Single-phase AC requires only two wires from source to load. There is one neutral wire and one power wire, with current flowing between them. 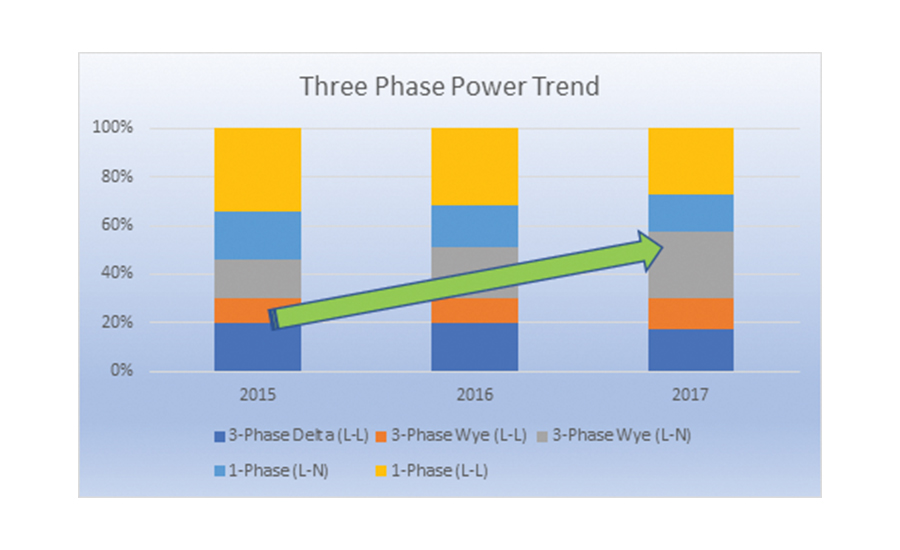 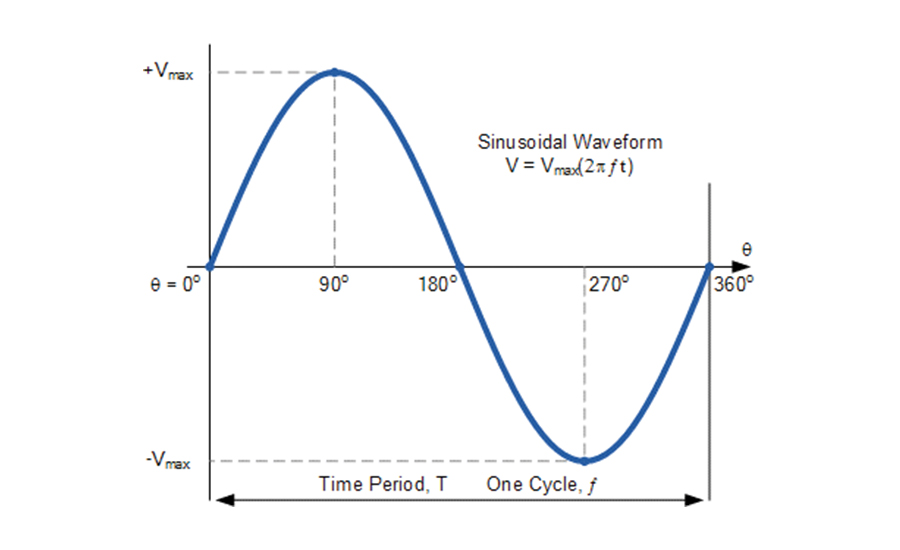 The power delivered by single-phase alternating current varies with time. Single-phase AC power peaks in voltage at 90° and 270°, with a cycle completing at 360°. With the peaks and dips in voltage, the flow of current is constantly alternating direction. In the U.S., the magnitude and direction of current flow change 60 times per second.

Single-phase power is typically employed for loads under 1 kilowatt (kW).

WHAT IS THREE-PHASE POWER?

In a three-phase power system, there are three power-carrying wires. The power supplied on each wire is 120° out of phase relative to the others, like Figure 3. Because the power delivered by three-phase never falls to zero, three-phase power is ideal for motors. It eliminates the need for starting capacitors, and it allows for smaller wires (less copper) and lower voltages for the same power transmission as single-phase, usually making it less expensive. 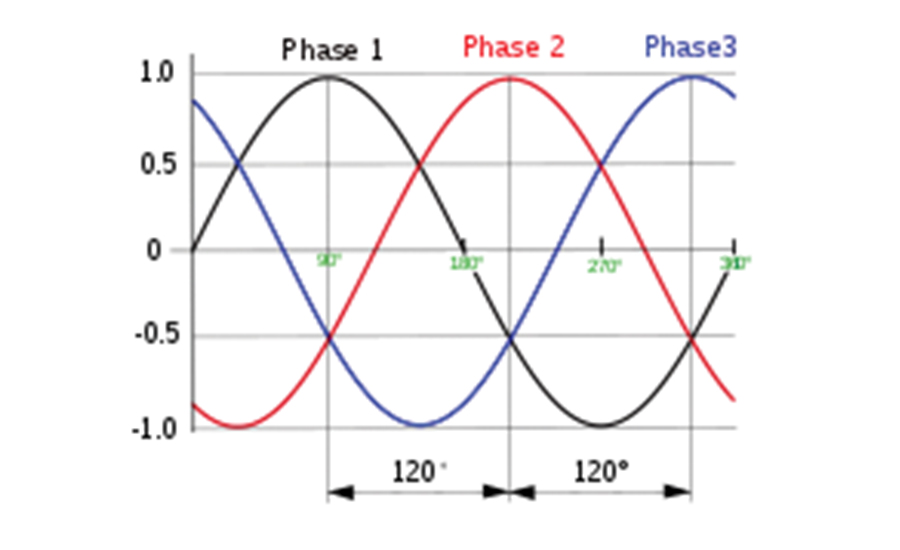 Three-phase Delta employs three power wires and a ground wire without the neutral wire. In it, the three phases are connected like a triangle, as shown at right in Figure 4.

Three-phase Delta uses less costly wiring than Wye, and requires fewer breakers. The downside for data centers wired with Delta power is lower flexibility when it comes to what can be plugged in.

Three-phase Wye uses both a neutral and a ground wire, and requires an additional circuit breaker at the power panel vs. three-phase delta. 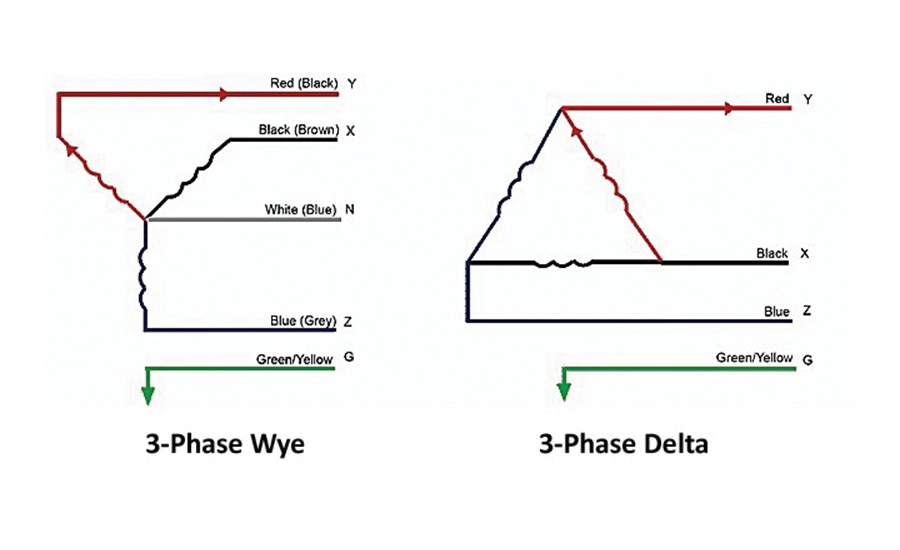 Delta-wired devices can be fed from a Wye source by omitting the neutral wire (Figure 6). In a data center, a Delta power distribution unit (PDU) can be used when the loads being supported only require 208VAC. 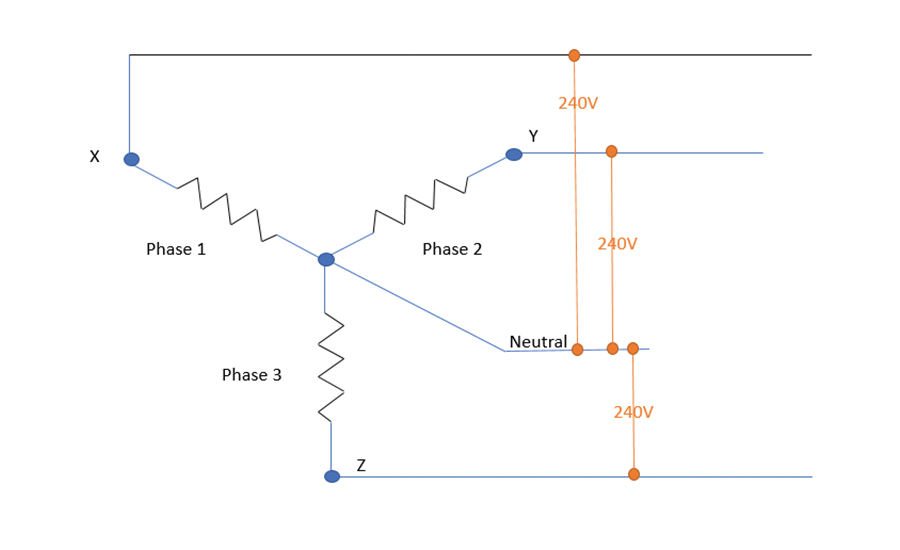 BENEFITS OF THREE-PHASE VS. SINGLE-PHASE POWER

The benefits of three-phase vs. single phase can best be summarized as follows: 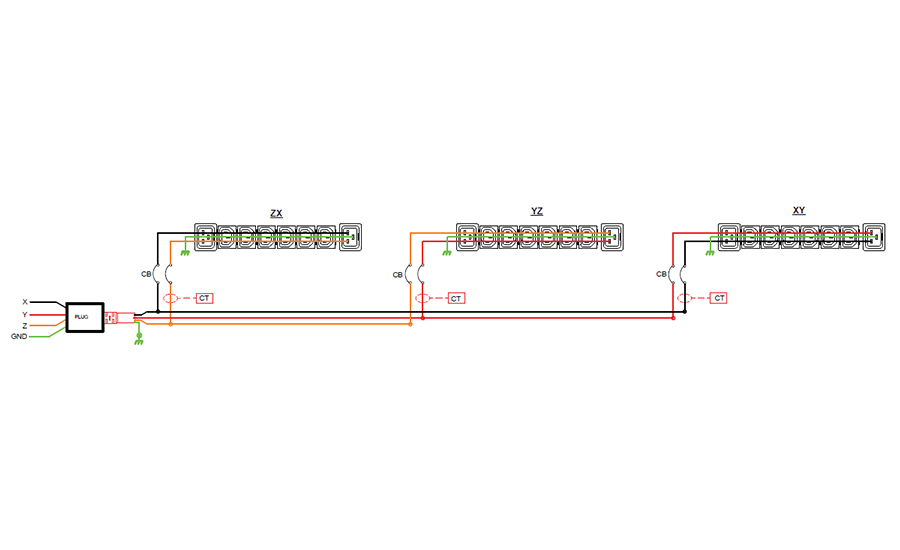 To support the growing power density of IT racks, most new data centers built in North America are employing a three-phase power architecture, with three-phase AC going all the way to the rack. Modern AC to DC power supplies easily handle the 208-240VAC input coming from a PDU, and are most efficient when fed 240VAC.

Figure 7 shows a typical wiring diagram for 208V, 30A Delta power distribution within a rack PDU. The input power is represented by X, Y, and Z along with a ground wire. A pair of powered lines (XY, YZ, or ZX) and a ground are used to provide 208VAC power for each branch. Proper PDU design dictates that one branch is used for each phased pair. This means that three branches are required to fully distribute the available 30A of power. The same number of outlets is used on each branch. By dedicating a branch for each phased pair, the end-user reduces the risk of overloading any single-phase.

Due to the maximum ratings of IEC 60320 C13 and C19 receptacles that comprise each branch, a 20A rated overcurrent protection device (usually a circuit breaker or fuse) is wired upstream. The protection device ensures that the receptacles cannot be damaged in an overcurrent (short-circuit) situation. The illustration above uses “CB” to identify the two-pole breakers used to protect each branch. 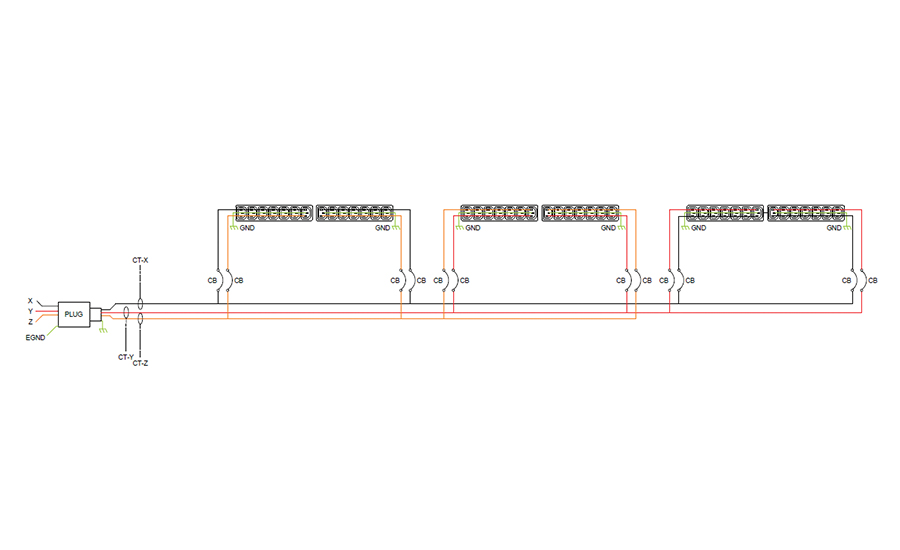 Keep in mind that this example is for 30A distribution. Many newer data centers are moving to 60A service at the rack to support high-density applications. Doubling the supplied current effectively doubles the minimum number of branches within the PDU from three to six to fully distribute the power as seen in Figure 8.

Wye distribution is also commonly found both inside and outside of North America. Instead of dividing the power into phased pairs as seen in the prior examples, each IEC receptacle gets a single-phase, neutral, and a ground wire. A common international scenario would be to distribute 400V, three-phase, 32A Wye power to the data center cabinet. When the 400V is wired line-to-neutral, then 230V is supplied to the outlet (400V divided by √3). Since the 32A power on each single-phase exceeds the maximum rating of the IEC C13 and C19 receptacles, the PDU manufacturer is forced to divide the power between two branches for each single-phase. Once again, a 20A overcurrent protection device is wired upstream of the outlets for protection. 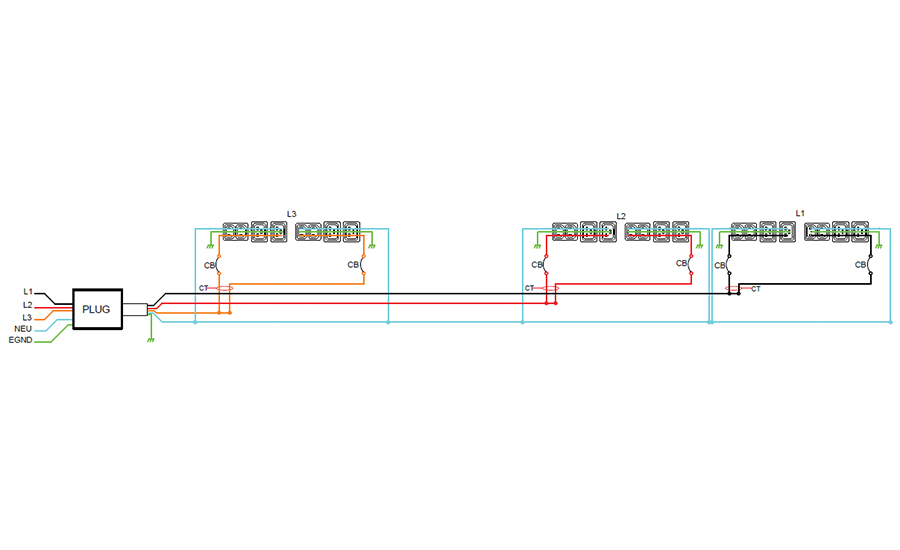 FIGURE 9. Example of the internal wiring used in a 400V, three-phase 32A Wye PDU.

Properly dividing the phased power into equal branches is of great importance to the data center manager and the electric utility feeding it. Careful planning of the IT load in each PDU can help distribute the load equally across each branch. This is referred to as load balancing. Equalizing the load on all three-phases provides the greatest efficiency in power distribution, as well as reducing heat generation by the power distribution infrastructure. Much has been written about data center load balancing in other papers, but the first place to practice proper load balancing is at the rack PDU.

The principles of three-phase power are not always well understood by the installer integrating the hardware into an IT cabinet (or “rack”), whose only task is to power up the equipment being installed. Load balancing (matching current draw on each phase) is critical in these applications for multiple reasons: 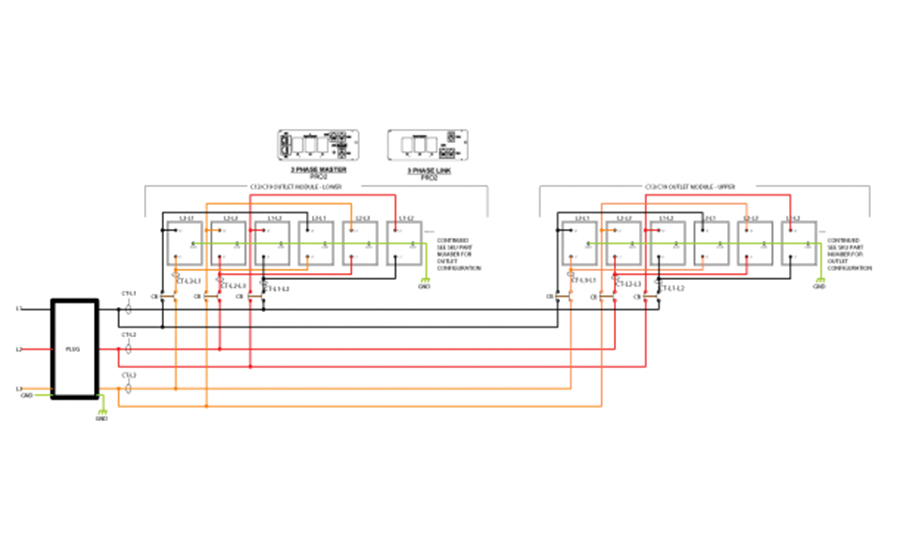 FIGURE 10. Wiring illustration for 208V, three-phase, 60A Delta PDU. Note that double the current of a 30A PDU means double the number of branches.

Good practice in the data center is to install rack-mounted equipment in such a way that the current draw is similar on each branch. This practice is relatively easy if the rack is filled with only one type of device (a homogeneous environment). Unfortunately, this is often not the case. Data center cabinets of mixed equipment such as switches, storage devices, blade servers and different brands and types of 1U/2U/3U servers can create a tangled web of power cables in the back of the rack. This situation can potentially inhibit airflow and add to the heat problems mentioned above.

The issues above are compounded by the move to higher density racks that demand more kilowatts of power. Higher power distribution at 60A and 100A force even more complex PDUs with six, nine, and even 12 branches. The power draw still must be evenly distributed across these branches.

A solution to these issues is to use an alternating phase PDU. These specially designed PDUs alternate the phased power on a per-outlet basis instead of a per-branch basis. See Figure 10 for an example of this.

Power wiring is simplified with this type of PDU since power cords do not need to be stretched across the length of the vertical PDU to reach separate branches. Plugging into a different phase only means moving the cord several inches to the next available receptacle. Shorter power cords from the server to the PDU can now be used, thus minimizing cord lengths and cleaning up the back of the rack cabling.

Increasing power density of IT loads continues to drive adoption of three-phase AC power distribution within the enterprise and hyperscale data center environments. The efficiency, flexibility, and simplicity that come with three-phase architecture yield tangible benefits to the data center operator. At the rack PDU level, using an alternating phase outlet PDU simplifies installation, increases airflow, and makes the task of balancing loads across phases an easy task.

For the foreseeable future, firms that rely on the power grid for running their data centers would be wise to “catch the wave” and deploy three-phase power in their next data center.

Marc Cram is director of new market development for Legrand's data, power, and control division, which includes the Raritan and Server Technology brands. A technology evangelist, he is driven by a passion to deliver a positive power experience for the data center owner/operator. He earned a bachelor’s degree in electrical engineering from Rice University and has more than 30 years of experience in the field of electronics.