In total the colocation market grew 11% in the quarter, in line with the average rate achieved over the past eight quarters. 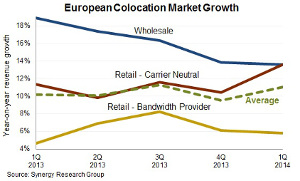 New Q1 data from Synergy Research Group shows that year-on-year growth of carrier neutral retail colocation revenues in Europe reached almost 14%, the highest growth rate the region has seen in five quarters. Growth in wholesale colocation revenues has typically outstripped the retail segments, but wholesale growth rates have been dropping and in the first quarter were on a par with carrier neutral retail growth. Meanwhile growth in bandwidth provider retail colocation revenues again dropped below 6%. In total the colocation market grew 11% in the quarter, in line with the average rate achieved over the past eight quarters.

The UK remains by far the largest colocation market in Europe — accounting for 27% of Q1 revenues — followed by Germany, France, and the Netherlands. Together the top four countries account for 65% of regional revenues. The next largest markets are Spain, Switzerland, Italy and Ireland. In the carrier neutral retail segment, the regional market leader is Equinix, closely followed by TelecityGroup and Interxion. Telehouse (KDDI) and Colt are the next largest players, though a long way behind the top three.

“Despite the presence of all the major telcos in the European colocation market, the carrier neutral segment is far larger than the bandwidth provider segment” said Synergy Research Group’s John Dinsdale. “Clearly customers see benefits in having a choice of carriers and consequently the relatively open European market has enabled the growth of pan-European colocation specialists.”