Stay Online Corporation™ has released the IEC Lock+ connector, which builds on the success of the original IEC Lock first launched in 2010, and brings to market a newer model which features a revamped version of the release mechanism. While retaining the original idea of the locking mechanism, the incorporation of a new release mechanism allows for disconnection from all sides. The new IEC Lock+ connector requires no other equipment or special inlets to secure it, simply plug it into an appliance as you would a standard IEC lead. 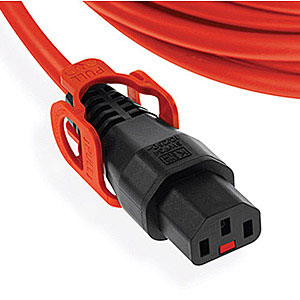 The new IEC Lock+, designed for use in areas where access is limited and ease of removal is of paramount importance uses the new red cage release mechanism rather than the previous pull-tab. The red cage release mechanism also marks the new connector out from standard non-locking IEC leads. This is especially important in data centers where there are likely to be thousands of leads and allows maintenance and other data center staff to clearly identify critical and non-critical power sources.