Earth Day And The Data Center

As our world becomes ever more data centric, the data center and the energy it uses seems to become a focal point of criticism for groups such as Greenpeace and the Sierra Club, as well as many others.

Of course, it is easy to blindly point to a big building full of servers that turn megawatts of energy into heat, and then criticize them as the scourge of the earth and the root of all evil. Yet many of those members and supporters of those same groups (if not in fact, but in spirit) want to watch TV and movies on their smartphones, tablets, and computers. Moreover, they also want to post their protests about data centers’ energy usage, (as well as what they ate for breakfast), on their favorite social media site.

And, of course, this extends the endpoint distribution networks to deliver multi-megabit content to businesses and homes, as well as the myriad of 4G (and soon 5G) wireless mobile networks to support streaming video and gaming. In fact, Netflix is estimated to use approximately 30% of the Internet, not to mention endless YouTube 45-min videos of someone’s cat sitting on a couch (now in HD resolution of course), or the billions of Facebook and Instagram high-res photos of people doing things they will later regret. Yet despite the seemingly obvious user-driven demand, it is the data center that gets targeted as the problem.

The general public just can’t seem to get enough technology and expects and presumes that the cloud, the Internet, as well as their smartphone should operate in some magical place in the sky. In addition, that it should all not require any significant energy to instantaneously deliver anything, anytime, and anywhere. It also appears to be considered as an inherently presumed entitlement, like air and water.

On Earth Day, green, sustainability, and energy efficiency are chanted repeatedly. I looked at the official www.earthday.org website (presumably hosted in a net-zero energy cloud), where they refer to the “Ecological Footprint” and even have an animated online interactive calculator, which I decided to try.

This can be calculated for various countries or areas across the earth and it is based on an individual’s existence and basic living activities on our home planet. 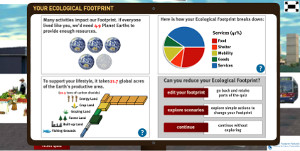 in a given year. These materials and wastes each demand ecologically productive areas, such as cropland to grow potatoes, or forest to sequester fossil carbon dioxide emissions.”

The calculator constantly plays streaming music (which of course uses additional bandwidth), while you enter your country (I chose USA), personal eating habits, and housing conditions (ranging from a house without running water or electricity to luxury condo). I picked the mid-level default answers and it advised me that in effect I was an ecological monster gobbling up massive resources and apparently needing 22 acres just to support myself.

It did not ask me if I watched TV or used the Internet (or was running my own data center), but apparently the focus on my gluttony was mostly based on how much energy it took to support my obviously excessive “lifestyle” (buying food, not growing my own, traveling five to 15 miles to work, and living in my own home).

Of course, our personal and collective behavior will obviously affect our ecological footprint. I will not delve further into the more mundane details for improving the human existence that the site recommends, such as composting. However, I would like to refer to a top level recommendation on recycling of paper, the Earthday site states:

“Recycling paper, for example, can decrease the total amount of virgin timber that must be harvested to meet global demand for paper, thus reducing humanity’s total Ecological Footprint.”

And while there is nothing wrong with recycling paper or other resources, oddly

it does not seem to directly refer or address not printing something in the first place. Whether it is a book, magazine, or newspaper, it is far less resource intensive to use electronic information to disseminate the same or even greater content. This would seem rather obvious when compared to cutting down trees, transporting (using fuel) them to the paper mill (which uses large amounts of water), then transporting it again to the printer, and on to the newsstand or ultimately delivering it to the consumer’s home or office (and then transporting it all back to the recycling center).

I am not advocating that we banish all paper publishing since I still like to read books and magazines in paper format, such as Mission Critical. However, I find it curious that earthday.org would focus on recycling paper rather than comparing the total resources used by electronic delivery as an alternate communications medium. I believe that both can co-exist, and that it is a question of balance, not one totally replacing the other.

For example there is eLearning, which also would seem to have an overall positive environmental footprint. Is it not more energy efficient to deliver the “classroom” to the student, than transporting for dozens, hundreds, or even thousands of people to a physical school building (which uses energy for heating cooling and light, etc.). Even government (never known for its efficiency) has gone digital and has moved away from paper.

Of course, the Internet changes the way business is done and how many people shop and purchase items. Companies such as Amazon and eBay are two prime examples. Amazon, which began as an online book seller, then effectively upended the paper publishing industry with the Kindle-based content distribution. Along the way they became a massive online ecommerce giant. More interesting, they made a business out of selling excess compute capacity that they had built-up to meet peak shopping demands, which rapidly grew in what is now the Amazon Cloud.

In the case of Ebay, it started by letting individuals at home or small businesses to sell almost anything to anyone, more cost effectiv 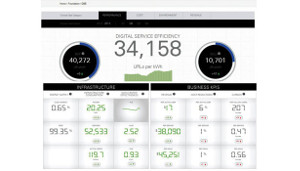 ely, instead of waiting for a local flea market or placing a small ad in the local paper (a presumably “greener” process overall). Since then, eBay also grew massively and has refined their entire processing chain and data center energy efficiency and developed their own “digital service efficiency” (DSE) metric, conceived, and championed by Dean Nelson. This is really an “energy efficiency per transaction” business metric, which, in my opinion, reflects the ultimate view into how business should evaluate their efficiency (disclaimer — I do not work for eBay or own any stock). Moreover, while most corporations would perhaps want to keep this hidden, eBay posts it openly for all to see at http://tech.ebay.com/dashboard.

The dashboard shows not just a quarterly updated PUE, but also water usage effectiveness “WUE” and carbon usage effectiveness “CUE.” This is far more information than most data center operators may even know (especially WUE and CUE), much less are willing to share publically. Nonetheless, they are all facility metrics, and do not reveal anything about how effectively the IT hardware and software are performing and ultimately, how well it delivers “work” (something that has been a longstanding question that many people agree needs to be measured, but so far there is no universally agreed metric). More significantly, the eBay “DSE” dashboard calculates the number of watts vs. the number of transactions delivered.

On the facility side of the data center industry we have come to worship and even covet a low PUE. However I am not pretending that some data centers have less than optimal use of energy; clearly there is a lot that can be done to improve it. There are still many sites that are just now beginning to even consider their WUE and CUE. Clearly computing and digital performance has improved perhaps over a million fold in the last 50 years (see last month’s “Archeological Dig” column). In comparison, the data center’s power and cooling infrastructure has improved only somewhat mostly over the last five years.

Of course, this brings us back to the data center on Earth Day (and indirectly to the resources used by the data transport network, wired and wireless).  So the basic question needs to transcend how many watts a data center uses, but what does it do to improve the human existence (some may not think it does). Moreover, is it just a reflection of whether humankind in its quest for self-improvement, just as we went from walking or using horses, to mechanized land and sea travel and finally by flying, just to go faster and further. Let’s look beyond the data center to the problem, and more toward ourselves, our values and own actions, before we blame data centers as the energy menace.

No, I not am advocating going back to the pre-Internet “stone age,” I am only asking that we use Earth Day to consider if the data center industry is the source of the problem. Therefore, we should re-examine the overall environmental impact issues holistically and look at the bigger picture.

Is it just a result of human nature to desire more, better, faster, without regard to the environmental impact, or does having virtually unlimited and instantaneous access to news, literature, and dare I say it, “social media,” as well as “entertainment,” a positive step? Does ecommerce and online shopping (and shipping) potentially have a lower overall environmental impact than traveling to multiple stores just to “shop,” numerous times, perhaps without buying? I do not have the scientific answer to this question, but it is one that I believe is a far more important one for the long-term existence and well-being of us all.

And isn’t that what Earth Day should be about?