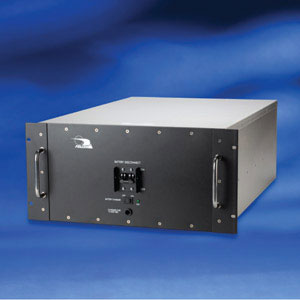 The batteries and chargers are housed in a sleek rack- mount enclosure which takes only 5U (8.75 in.) of vertical rack space. The 40 Ahr batteries join other options for the industrial-grade SSG UPSs including, an SNMP/HTTP agent board, frequency converter, and ICB conformal coating.

The state of the industry