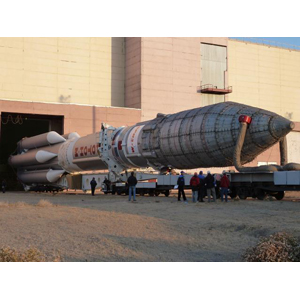 This was the 369th launch for Proton since its inaugural flight in 1965, and the 68th ILS Proton launch overall. The Proton Breeze M launch vehicle was developed and built by Khrunichev Research and Production Space Center of Moscow, one of the pillars of the Russian space industry and the majority shareholder in ILS.

Dennis DeCoster, principal, Mission Critical West Inc., in charge of designing, installing, and testing the Western Hemisphere earth stations for the past two years, said, “If successful, ViaSat1 will have far more capacity/bandwidth than all other North American satellites combined.”

ViaSat-1, weighing over 6.7 metric tons, is the highest throughput satellite ever built, with a total capacity in excess of 140 Gbps, more than all satellites covering North America.  The all Ka-band satellite will be positioned at 115.1 degrees West longitude with an expected service lifetime of 15 years or more.  ViaSat-1 was built on Space Systems/Loral’s space-proven 1300 platform with 72 spot beams; 63 in the U.S. and nine over Canada. The Canadian beams are owned by satellite operator Telesat and will be used for the Xplornet broadband service to consumers in rural Canada. The satellite is designed to deliver service for 15 years or more.

ILS President Frank McKenna said, “It is extremely rewarding to be entrusted to launch our customers’ satellites.  With this successful launch on ILS Proton, we are able to support ViaSat’s innovative plan to enhance and expand high-speed broadband services with the most powerful all Ka-band satellite in the world. On behalf of ILS and Khrunichev, we congratulate ViaSat on this milestone achievement and thank the teams of ILS, Khrunichev, ViaSat and Space Systems/Loral for a job well done.”

“The successful ILS Proton launch of ViaSat-1 is a crucial part of our growth strategy to allow customers to be connected anywhere at any time and at higher speeds. This much anticipated launch is an integral step in paving the way for more affordable and better quality bandwidth to meet consumer’s increasing demands. We applaud the teams at ILS, Khrunichev and Space System’s Loral who worked tirelessly to ensure a flawless mission and launch,” said Mark Dankberg, ViaSat-1 CEO.